Jack White has taken on a mysterious aura in the world of Rock and Roll. With his humble beginnings with The White Stripes, and his continuing saga over the course of solo works, Dead Weather, and The Raconteurs, Jack White is today’s exploratory ghost.

White’s work with the Raconteurs spreads out among two studio sets – 2006’s Broken Boy Soldiers and its 2008 follow-up, Consolers Of The Lonely. Both albums left pleasant vibes with fans. It’s been ten years since the last album release by the band. That ends with the upcoming new Raconteurs set expected at some point in 2019 with recording sessions either just finished or still ongoing. 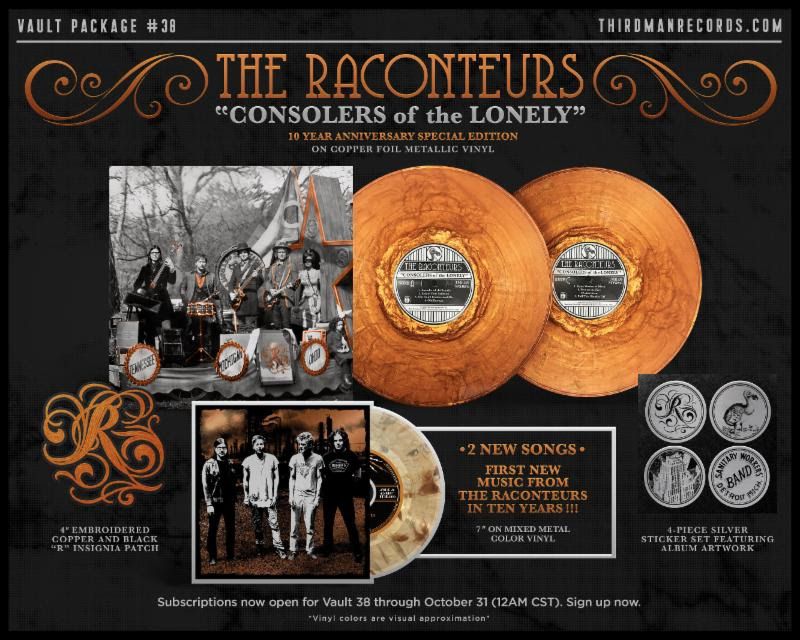 To still the waters of anticipation, The Raconteurs will be reissuing their stunning Consolers Of The Lonely on vinyl for a ten year anniversary celebration of the title. The LP will be presented on “copper foil metallic” color vinyl.  The reissue will pack in a 7″ 45RPM single as a bonus, made all the more exciting as the single will include two brand new songs from their current (or completed?) recording sessions for the new album. The bonus ” will be pressed on “mixed metal” color vinyl.

The cover art for the 2LP set will be reimagined to match the metallic theme of the vinyl adding metallic accents. The music on Consolers Of The Lonely will be newly remastered. There is NO word on any song titles for the 7″ vinyl single. Bonus swag will include a set of four silver stickers, and a 4″ embroidered “R” insignia patch.