Several years ago there was a beer commercial (it’s always a beer commercial. isn’t it?) depicting four bros hitting the links on the golf course and chatting about things that are “classic.” One dude mentions “Foreigner’s first album,” and his crew scoffs. He defensively replies, “No, really!” 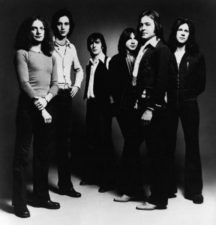 Specifically, those first three albums – the self-titled debut, Double Vision, and Head Games – are firmly ’70s rock albums, meaning hard rock with a pop edge and a bit of a misogynistic viewpoint. Don’t act shocked. In the wake of Led Zeppelin and Bad Company, the bad boy cliches were thick in that decade and into the 1980s. Even Journey is guilty of this, most tellingly with the song “Line of Fire” where Steve Perry indicates he’s going to shoot his girlfriend for cheating on him. I’m not saying this was right behavior in any way, but I am saying this was normal for the times.

There is a more vulgar, but completely appropriate bucket for the crotch-leaning ethos of the day: “cock rock.” Foreigner had a few on the docket. Think of “Love Has Taken Its Toll,” “Seventeen,” “Dirty White Boy,” and the booty call anthem “Urgent.” After “Waiting For A Girl Like You,” the band banked a hard-right into adult contemporary life with “I Wanna Know What Love Is” and “I Don’t Want To Live Without You.” This, too, is not a shocker. Journey, again, REO Speedwagon, and even Chicago found gold in the soft rock vein and chose to keep mining.

We’re left with the original question: is enough of Foreigner’s debut record time-tested for the worthiness of the honorific of “classic,” especially when measured against other indisputable examples? 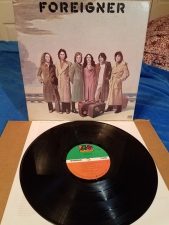 It did not lack hits. Bursting out of the gate with two major hits in “Feels Like The First Time” and “Cold As Ice,” and coming in with third single “Long Long Way From Home,” the band staked their claim on the charts, and you must admit that both original singles deserve the attention they garnered. Specifically “Cold As Ice,” you have deceptively complex musical ideas occurring like a multilayered vocal harmony piling upon itself in the bridge, something more common to baroque pop than a top 40 piano-puncher such as this.

One thing that benefits the debut is that, while this group was untested, it did not lack experience. Bandleader Mick Jones had been the guitarist for Spooky Tooth. Vocalist Lou Gramm previously performed with Black Sheep (under his birth name, Lou Grammatico), and multi-instrumentalist Ian McDonald had been a member of King Crimson. Jones, drummer Dennis Elliott, and McDonald were British, while Gramm, keyboardist Al Greenwood, and bassist Ed Gagliardi were American and, thus, all were foreigners to each other’s country. (When this configuration of Foreigner dissolved, leading to the 4-piece that made 4 with Robert John “Mutt” Lange, Greenwood and Gagliardi formed the group Spys.)

The name Foreigner connected. Another Brit in the mix, while not a credited regular member, was Stories lead singer Ian Lloyd who provided backing vocals for many of the group’s offerings over the years.

The band knew how to make records but, as of yet, did not know what they could get away with, so even in the debut’s harsher moments, things do not come across nearly as crude as the swagger that later records extolled. Except, I suppose, the barroom badass blues of “Headknocker,” which recounts the story of a honky-tonker known for his aggression. A memorable line from the tune: “If that don’t teach you a lesson, (he) might show you his Smith & Wesson, don’t let me say it again…”

The first album has little to be ashamed of, and that includes the track “Starrider.” Granted, it came off as a bit hippy-dippy, even in its time. Mick Jones recounted in an interview that when he was pushing to get the band going, a record producer absolutely hated “Starrider.” Lines like “And ever on I sailed, celestial ways, and in the light of my years shone the rest of my days,” probably didn’t make the sales pitch for the tune, subsequently sung by Jones on the album, any easier to market.

This neglects the time in which the song likely was developed, being 1976, far less than a decade away from flower power, Hair, and Godspell. The zeitgeist may have been hardening emotionally, but to consider “Starrider” some strange anomaly is short-sighted…and if you can get past the lyrics a little, the music is quite pretty.

It was never going to be a hit, not like some of the other album cuts that had potential. “Fool For You Anyway,” as a flirtation, sets the groundwork for the band’s later infatuation with balladry, but doesn’t have the kind of singleminded attitude about it. It doesn’t shout, “This Is The Ballad!” Instead, it fits into the package as a breather before the big finale of the grinding “I Need You.” “Fool For You Anyway” would have been a smash on AM radio had it been issued as a single, but this was 1977. The goal at that time was to give only a small handful of singles, build up an audience for the entire album as well as live performances, and move on to the next album recording session. It was not uncommon for a unit to record a record each year under this model. That would not change until 1982 when Michael Jackson’s Thriller issued one single after another, practically coronating itself a greatest hits collection.

Another track, the side one closer “The Damage Is Done,” nods toward more adventurous ideas than the standard “sex me up, baby” rock album typically allowed for. Constructed around three different musical parts, all unique enough melodically to have been their own songs, the whole still comes off as perfectly cohesive. One assumes that rock peers like Brian Wilson with “Good Vibrations” and Paul McCartney with “Band On The Run” offered Jones and Gramm license to experiment. Its placement in the running order on the record is itself, kind of brilliant. The song works itself up from a tentative trudge into a more conventional rock form, then a blues-style mournfulness and, finally, ends with Gramm alone singing “The damage is done.”

The end. Flip over the LP or the cassette. This creates its own sort of statement and reveals the level of care that was put into the song sequencing.

Many albums come and go over the decades that were hits in their time but provoke others to wonder why years later. Some are revered almost by way of obligation. At almost every turn, Foreigner’s debut never causes you to question why individuals would have been drawn to it. There is far more craft – not mere competence – on display than the band has been given credit for.

Maybe I’m biased. I probably am biased, come to think of it. This record will forever remind me of places that no longer exist in times that seemed far simpler and easier to cope with then than now, which is a common feeling for a pre-teen. I probably got the album on cassette in 1980 or 1981. Of course, I already had the 45 rpm singles of “Cold As Ice,” “Feels Like The First Time,” “Double Vision,” and on, but this would have been my first engagement with the record as a whole, with all of its organizational intents intact. It would have been late summer. It was a year of “Han Solo on Hoth” action figures and Cheap Trick t-shirts where the images were those horrible, rubberized iron-on appliques that flaked and peeled away after one washing. It would have been at K-Mart where the cassette was sealed in those protective long cassette frames – something akin to a locked chastity belt – to minimize shoplifting. Those would have been kept in the locked display case with hand-holes drilled into the clear plastic fronts, just enough to get your pudgy paws in to look at the backs of the tapes, but not enough to get the tapes out.

It would have been my mom paying for the tape and sending me out to the car while she started Christmas layaways.

I make no claims to impartiality, and recognize that you, with your different frames of reference and history, may not take away the same feelings I do when I hear this album again. But does this constitute, at least in part, a criterion for being considered a classic, that after such a long time (that hardly feels like a long time at all), you are brought straight back to the moment of engagement? In my mind, that’s the only valuable takeaway from whatever these ventures might be, either “art” or “entertainment.”

While I would not consider the opinions of actors portraying golf bros on a course, debating the longitudinal merits of beer and other things as wise counsel, in the case of Foreigner’s debut, I’ll give them the point.