ALBUM REVIEW: THE GRIP WEEDS, “Trip Around The Sun” 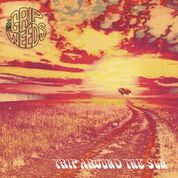 Trip Around The Sun is the vibrant. new 12-song collection of Grip Weeds originals – reflecting the band’s determined, yet positive, outlook on life through the power of music. It’s the band’s second album for the legendary JEM Records label, following 2015’s acclaimed ‘concept album’ How I Won The War, and Force of Nature: Live In NYC, a DVD concert film, released in 2017.

After decades of acclaimed studio and stage work, The Grip Weeds are regarded as New Jersey rock royalty, featuring a mercurial set of brothers (singer/drummer Kurt Reil and guitarist Rick Reil) and one married couple (Kurt Reil and lead guitarist Kristin Pinell Reil). Long-serving eighth (!) bass player Dave DeSantis is the only Weed not bound by DNA, and, to date, is their only bassist to not spontaneously combust on stage, be absorbed by the Federal Witness Protection Program or marry a Kardashian…

From a production standpoint, Trip Around The Sun is a confident, yet nuanced, slab of modern, classicist rock that connects the dots of popular music’s present, past, and future. While self-producing the new recordings, the band members alternated between the studio floor and control room of their already-bustling commercial studio. The Grip Weeds built and operate the legendary House of Vibes, located under their house in Highland Park, NJ.

“Every album produced at our studio somehow influences The Grip Weeds’ process,” said Kurt Reil. In addition to Trip Around The Sun, members of The Grip Weeds have also collaborated on recordings in the studio and/or performances with The Smithereens, Brian Wilson, The Cowsills, Lou Reed/Captain Beefheart/Jeff Buckley guitarist Gary Lucas and Beatles session drummer Andy White; fellow JEM Recording artists The Anderson Council, The Weeklings, The Red Button (featuring Peter Noone) and more.

As expected, Trip Around The Sun showcases the Grip Weeds’ guitar virtuosity and powerhouse rhythm section, but the band’s melodic strengths win the day with their trademark harmony vocals. The sunshine pop opening track, “Vibrations”, is just that – very Cowsills; very warm, POP with capital letters and delicious arrangements; “I Like Her” is a little more sedate, with restraint on the verses (reminds me of a slightly dark variation on “Love Is All Around”), but then instantly jumping into a poppy, upbeat, sing-song chorus and “Casual Observer (To A Crime)” charges out and grabs at you in that big, rock-pop manner (think The Posies), punctuated with on-the-one horns – this a BIG track, if you know what I mean, and it’s outstanding.  “Truth Behind The Lie” breezes along at 100 m.p.h., kicking in with charging guitars and three part harmonies – this is what a band who has mastered the art of pop sounds like, pure and simple – the riffs, the nuanaces – all of it; “She Tries” is another vocal delight, fleshed with reverbed guitars and harmonies on the verses, clean guitar fills – and a wonderfully surprising brief harpsichord break and the album’s title track closes out this collection; “Trip Around The Sun” is bouncy, angular, joyful and just explodes right out of the speakers – it’s bold and powerful and a damned fine way to wrap up the proceedings.

Another lap around that shiny orange ball is an opportunity to get it right, or at least enjoy the ride. The turbulent times that produced such vibrant, optimistic music in the 1960’s are now feeding back to the 21st century (for good, bad or indifferent), and Trip Around The Sun doesn’t so much pay homage to that but does it in a manner befitting the modern context.

Trip Around The Sun will be released on Friday, October 19th, 2018