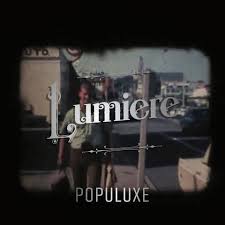 This latest work from the Brooklyn, New York – founded trio, Populuxe, is a corker.  While the band has always had a natural penchant for skewered pop – melding the best of The Beatles, XTC and Todd Rundgren/Utopia (from out of the gate, they know how to arrange songs), this newest release gets into a more serious, socio-political vein in many of the tracks – and this showcases the fact that they’re not just “quirky” pop.

“Lady Liberty”, which was introduced a while ago, is one of these magic moments of melody, structure, skill and knowing how to flesh in the colors of the entire track without losing the musical bouquet – the song’s legs are strong, mixing soundscapes, very deft background vocals and some powerhouse drumming – a magnificent apex in this band’s career, to date; “Garage Sale” – another album pre-release – is definitely a Black Sea-era XTC-influenced piece, but you listen to the crisp, shimmering guitar riffs, the throttling rhythm section and the explosive chorus and it doesn’t matter where the inspiration may have come from – these guys know what and how to do it – and listen to the production – Populuxe deliver the kind of sound I love; big, booming drums, pulsing bass and guitars that have buoyance, instead of being muted or pushed too far down in the mix – they get the balance just right.  “How Long’s It Gonna Take?” is the album’s magnum opus at 8:03 – if I’m guessing right, it’s a spoof of dance-y type tracks with a pithy lyrical mantra; it very neatly morphs from a drum beat and handclaps into a rhythm not dissimilar to Amy Winehouse’s “Rehab” (listen for those sax punches, by the way) – this is the band at its height of creative insanity and humor – and this is a very good thing, indeed.  “Behind Enemy Lines” is unadulterated intensity – driven by a hypnotic riff and then not-quite-standard timing, but propulsive drumming and “Who’s Laughing Now” is the album’s epic closing moment (kind of reminding me of “Travels In Nihilon” or “It’s Nearly Africa” with its beats); dissonant guitars and killer counterpoint vocals.

This is a band that I’ve followed from the first time I heard them; subsequently, they never cease to amaze and impress me as they have “the goods”.  Always interesting subject matter in the lyrics; as said, the musical arrangements are stellar and just right – and Lumiere is a very natural progression in the genesis of Populuxe – a monniker that’s very appropros – deluxe pop (my interpretation).  Pop isn’t always pretty, even if the melody is sweet…  and thank God for that.  Populuxe shines on.

*Not to be missed!

Lumiere will be released on Tuesday, October 2nd, 2018