Ribot on Trump: The MusicTAP Interview

The separation of immigrant children from their parents.

The trashing of the Paris Agreement on climate change.

The white nationalism. The Mueller investigation. The Tweets. The wall. 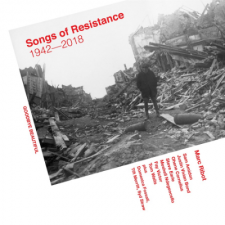 There’s been no shortage of reasons to hate Donald Trump and his lie-filled House of Whiteness. Marc Ribot’s heard more than a few of them. But what prompted him to compose and release a new “anti-Trump record” – Songs of Resistance: 1942-2018, out Friday via Anti- Records – is less about progressivism or being reactionary than trying to find a bigger tent, a broader, shared understanding of Western values. Ribot, a 64-year-old NYC icon who self-identifies as Jewish, told me recently a lot of his inspiration is in the parallels he sees with World War II, the Holocaust, and the rise of fascism in the 1930s and 1940s.

“To be Jewish is to live every day with ‘How could that have happened during World War II and how could the people have allowed it to happen?’” he said, speaking to me by phone from his New York City home as summer wound down. “The second part to that is: what would I have done if I were there? If I don’t speak to [current issues] as directly and as pointedly as I am, I couldn’t live with myself.”

On the new record, Ribot – best known as a sideman for Tom Waits, Elvis Costello and T. Bone Burnett, but also an accomplished avant-solo guitarist in his own right – assembles an all-star cast to do his bidding. Tom Waits, with whom Ribot most famously collaborated on the 1985 gem Rain Dogs, appears on “Bella Ciao (Goodbye Beautiful),” bellowing over Spanish-style guitar about partisans and fascists, extending the link between Trump and a history of European ultra-nationalism. Steve Earle and Tift Merritt join Ribot on the cowboy-country shuffle of the protest song “Ain’t Gonna Let Them Turn Us Around.” And Fay Vincent sounds particularly urgent belting out “Good people of Missouri thought John Brown was insane/ Meanwhile in their backyard/ they had human beings in chains” on the funky exercise “John Brown.” The record, Ribot admits, does have policy implications but, even when it comes to the musical backdrop, there’s not a dud on the disc.

And, then, there are songs that clearly resonate for Ribot. To that end, there’s “The Militant Ecologist,” where Meshell Ndegeocello waxes poetic, her voice pillowy-soft and almost breathy, on a track inspired by “Fischia il Vento,” an Italian partisan song from 1943.

“What inspired me? I read the climate scenarios and I think we have to do whatever’s necessary,” Ribot said. “This literally threatens the lives of future generations. My ‘militant ecologist’ is about doing something they feel they have to do.”

Ribot said he tried to craft the songs, first, around issues of political engagement, and, then, around the contributing singers’ style. It makes sense. The Waits track, which hints at his devil’s-grin tune “A Little Drop of Poison,” could parallel the acoustics of Waits’ presumed-Iraq-War protest “The Day After Tomorrow” – off 2004’s Real Gone, incidentally, on which Ribot also played. And, true to his roots with the Downtown scene and relationships with labels like Tzadik, Ribot works alongside some Zorn-ian sax blasts on “We Are Soldiers In The Army.” Songs of Resistance isn’t a folk record, where guitarists rail against authority and rules but stick to 4/4 time and major chords. And don’t call it a “Downtown record.” Instead, view it in the tradition Ribot has cast, a kind of shared right to assemble and be pissed off about the State of the Union, in the year of our Lord 2018.

“I’ll be honest with you, in a lot of ways this isn’t ‘Downtown,’” Ribot said. “On this record, if someone says, ‘This is agit-prop!’—where the political message takes precedent, as the music is concerned – I’ll say, ‘That’s right. I made that decision.’”

And as a piece of agit-prop – Trump even appears on the new LP, to make matters worse for himself, via sound clips – Ribot only extended the invite to participate to U.S. citizens (sorry, Elvis Costello) with the exception of one Mexican singer, who appears anonymously for fear of retribution with their travel visas.

“I thought that this was very specifically a political response to Trump,” Ribot said. “I wanted it to be Americans, or those with skin in the game.”

Ribot said he also approached the project, despite its fieriness, with a degree of restraint. For one, he admitted that, yes, he considered the economics of it all.

In addition to working in the studio on his pet project – Songs of Resistance is, roughly, his 23rd or 24th “solo” or band-leading outing – Ribot said the new LP is informed by his frequent travels around the world. And, no, despite citing great times in places like China, Portugal, Germany and Italy, to name a few, he doesn’t always like what he sees.

“I’ve traveled more than most human beings,” he told me. “I see a very dangerous, anti-democratic, authoritarian phenomena – it has to be fought.”

Ribot’s not putting all of his political eggs in one basket, either. On Ribot’s new Ceramic Dog LP, YRU Still Here, there are a share of blasts against the current administration and prevailing “wisdom.” Ribot also is willing to take his message to the streets.

“I’m ready to perform these tunes whenever and wherever is politically helpful,” he said. “The issues that are talked about on this record – anti-racism, issues with the environment and attempts to stop global warming – are not Left issues. [Climate change] was considered a bipartisan issue and this isn’t 100 years ago. Republicans need to drink water and breathe air as much as Democrats do. This shouldn’t be a partisan issue.”

In an age of intense partisanship – where new grounds are unveiled everyday to justify Trump’s impeachment, but a GOP-controlled Congress sits in the wings, doing nothing – Ribot stresses he’s passionately trying to find the issues that bind us, not separate us.

“I am very partisan for a popular front – against racism and for democratic institutions, for the press – but I believe I’m also rational,” he added, in closing. “Had I been alive in Italy in the 40s, I would have been honored to be a member of the partisans.”