Living in the Past: 20 Years After “Kiss Me,” A Look At Sixpence None The Richer’s Self-Titled Album

Seraphic lyrical aspirations delivered by the voice of a cherub, Sixpence None the Richer were always more than an earworm rom-com soundtrack. The band is defined in the popular consciousness by their global mega-hit “Kiss Me,” released as a single on August 11, 1998. But on their self-titled 3rd album that housed the single, the puppy-eyed innocence of lines like “Kiss me/Out of the bearded barley…Oh, kiss me/beneath the milky twilight” lies comfortably alongside reflections on mortality, artists’ angst, everyman angst, 90’s angst, cosmic consciousness, and Chilean break-up poems.

That’s the beauty of an invigorated, mature artist in full stride. Now five years into their musical partnership, guitarist/principal songwriter Matt Slocum and vocalist Leigh Nash had been through some breakups—with former bands, band members, and record labels—and were now in a new relationship with a independent label (Squint) and producer (Steve Taylor) they trusted to see their artistic venture through. The resulting album preserved the best of Sixpence’s previous jangle-and-shadows alternative rock with a less morbid approach to introspection. The band groove and brood, Taylor’s production is lush but transparent, and the tight 50 minutes runtime allows the songs ample room without forcing an unnatural hour to justify the price of a sale.

So, how did this independent, kinda-sorta-Christian-rock-but-not-really-except-when-they-were alternative band from Texas break through into multinational chart success (and department store immortality)?

That’s the beauty of the 90’s. Sixpence were given the freedom and resources to work the album for an extended period. Rather than a flash on the charts with sales tapering off a few weeks after release, the album built to its platinum-selling status over the course of 3 years, on the strength of a single birthed almost a year after the album’s initial release and subsequently borne aloft by some well-negotiated placement on a WB television show (remember when the CW was the WB?) that led to the limelight of placement in a teen movie (remember when those had long lives in theaters?) that led to sales of 700,000 units of a CD single in addition to the million that the album itself sold.

Oh yeah, remember when CD singles were a cultural force? These CDs were about one-tenth of the content of a CD album, but with half the filler and for a quarter of the price—the math made sense in the world of the $18.99  price tag of shopping mall music retailers. 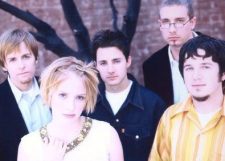 Sixpence None the Richer’s legacy is that of a uniquely fortunate piece of commercial art whose spirit strains to transcend its time whilst perfectly embodying the circumstances of that time. Overshadowed in memoriam by the success of its constituent parts, the album nevertheless occupies a noteworthy moment within the trajectory of both Sixpence None the Richer and the new-millenium-bound decade that spent its waning years entranced by “Kiss Me.”