The first released album by Malo features a stunning piece of art on its cover. It’s a painting of a woman in the arms of a king, created by Mexican modernist painter, Jesus Helguera. The classicism of this artwork heavily implies that the music within is equally as memorable, and as beautiful and engaging as can be imagined.  If you thought that, you were right. And rewarded.

The first full-powered awareness of Malo came at the airplay of “Sauvecito”. Issued as a single in 1972, the song eventually came to rest within the rarified air of the Top 20 charts of radio. The song was haunting, engaging, and a beautiful display of the Latin and Rock merge. The song was a six-plus minute centerpiece of a fine, fine album. Malo released eight more studio albums, with the first four issued by original label, Warner Brothers. From those, the band selected and released a series of singles, none of which did the traffic of “Sauvecito”, but just because they didn’t it doesn’t mean they were of a lesser quality. 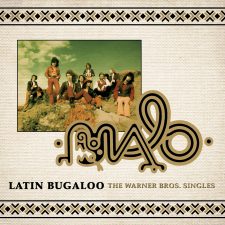 Needless to say, and Malo fans are aware of this, the band was as polished as could be. They treated every song with respect and delivered them with as much love as they could.

Omnivore Recordings has recognized the exclusivity of Malo. They’ve gathered and assembled a brilliant collection of Malo singles, provided an audio update, and packed in a great 16-page booklet complete with an 8-page essay on the first four albums.  In a time of nostalgic longing, Omnivore’s offering of Malo – Latin Bugaloo – The Warner Bros, Singles goes soul deep with fourteen singles. And while the band was unable to replicate the success of “Sauvecito” (and it was a HARD song to follow- up in its perfection) in the world of Top 40 fans, they never – ever – shirked in their responsibility to what they were about.

And for the record, the Malo – Latin Bugaloo (The Warner Bros. Singles) is a grand collection of Malo greatness. If you’re a fan, you’ll have no regrets.