For those of you that remember the music and song-craft of Barry White, you remember a performer that could touch the heart of an emotion, and make it stand out with a unique, often breathy, bass vocal. In the ’70s, almost everything Barry White released became an instant hit. In fact, there’s a collection of singles that achieved gold and platinum status. Of course, his albums did quite well. But most of us remember him primarily by his string of radio hits that still resonate because his voice and delivery was never replicated.

Barry White’s first song, “I’m Gonna Love You Just A Little More, Baby” opened the door to his fame. It seemed effortless for his talent to move forward with songs like “Never, Never Gonna Give Ya Up”, “Can’t Get Enough Of Your Love, Babe”, “You’re The First, The Last, My Everything”, and the beautiful “Love’s Theme” instrumental hit. Those are but a few of his classic hits.

On February 9, Mercury Records will release two sets of collected Barry White tracks. The first is a 3CD Boxset that will assemble 46 tracks for your listening. All songs are newly remastered from the original 20th Century Records master tapes. An included 24-page booklet provides photos, new liner notes, and full track details. Each of the three CDs are housed in separate wallet-styled sleeves within the box. The 3CD Box is being called The Complete 20th Century Records Singles (1973-1979), with both A and B sides of singles included. 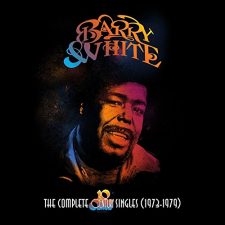 Mercury will also provide a truncated 20-track single CD featuring his best known songs for those that don’t need anything other than the strong, familiar radio hits. This selected set will be called Love’s Theme: The Best of The 20th Century Records Singles.

A 2LP vinyl edition replicating the single CD track list will also be made available with a bonus inclusion of “Satin Soul” by Love Unlimited Orchestra. It doesn’t include the CD track, “September When I first Met You” to make way for the exclusive addition.