The band known as Judas Priest has been with us since the late ’60s. Formed in 1969, this original iteration of Judas Priest contained Ian Hill, the band’s bassist who is still with them. The rest of the original members have long since retired. However, the band that was part of the first recordings including Rocka Rolla (1974) is STILL much of the band as you see them now with the exception of founding member, K. K. Downing, who was with the band for most of their career, bu is no longer a member due to disagreements.

An ongoing campaign of expanded and remastered reissues have been part of the legacy of this classic metal band. In 2014, the band released their last studio set, Redeemer of Souls. Not only did the album enter high on the charts, it became their first Top10 album in the US landing at 6. Over time, the album has sold 100,000+ copies of the album.

On March 9, Judas Priest will issue their eighteenth studio set. The new album, called Firepower, will be filled with fourteen new songs.  The band will showcase the new album with a tour that starts shorly after the release of Firepower. 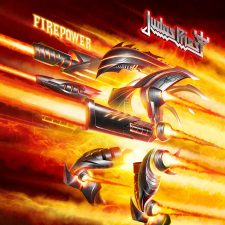 Firepower, like most albums these days, was financed by PledgeMusic crowdfunding, and is being distributed via Epic Records. A single (“Lightning Strike”) from the new album is now available and can be heard below.

Firepower can be acquired on CD, DD, and several limited edition color options of vinyl LP (go here for those) as well as standard black vinyl. There are also bundle options being made available with shirts, and signed guitars.