In the late ’70s, the phenomena of Rickie Lee Jones entered the charts with a song, “Chuck E’s In Love”, which elevated the debut release of her self-titled album. Rickie Lee Jones was nominated for a Grammy in 1980 for Artist of The Year and easily won the contest. Throughout her long career, RLJ has released 14 albums, several of them high profile. But her career was not defined essentially on just a few albums. Her compositions and singing stayed as high class as ever, especially on The Sermon On Exposition Boulevard, and other classics. Her last album was Kicks, released in 2019.

On April 28, Rickie Lee Jones will dive into the jazz classics from the American Jazz songbook with a collection of ten new recordings. The new album will be called Pieces Of Treasure. (A song from that album is in current release – hear “Just In Time” below.) RLJ hasn’t missed a beat and retains her Duchess of Coolsville title. 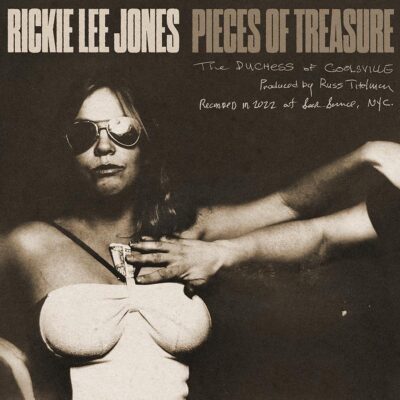 Pieces Of Treasure will be released via BMG’s Modern Recordings. It will be issued on CD, DD, and vinyl LP (industry black vinyl). You can pre-order here.