Carole King jumped into the mainstream of music with her monstrous album hit – Tapestry. Released in 1971, just one year after her Writer debut, Tapestry generated 4 A/B-side singles and sold along the lines of 30 million copies worldwide. Needless to say, the early ’70s were her stage points.

On May 26, Legacy Recordings will issue a live set from 1973 to be called Home Again: Live From Central Park, New York City, May 26, 1973. The set, celebrating 50 years since the show, will present 18 songs, some from her then as yet to be released album, Fantasy (1973). (Carole King released two albums before Fantasy and AFTER Tapestry [Music – 1971, Rhymes & Reasons – 1972]. Both albums contained hits, with Magic also containing the original version of the 1972 Carpenters’ hit – “Its Going To Take Some Time”. 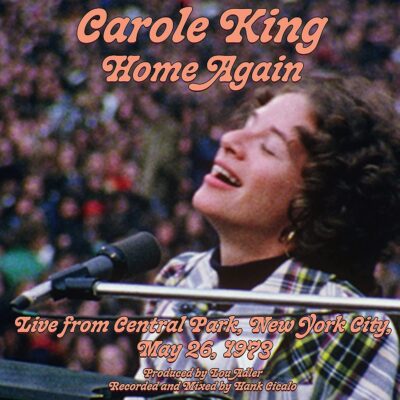 Home Again will be released on CD, DD, and vinyl 3LP.