There’s little that could be added to the legacy of Cheap Trick, a Power Pop band from the heartland of the US. From their upstart, they endeared a entire audience that ranged from several demographics and countries. Japan was awash with a wave of fans that helped bring extraordinary fame with the release of At Budokan. To date, the band (without original drummer Bun E. Carlos), the lineup is pretty intact. Their start began in 1977 with the release of their Epic label debut. They followed it up with In Color in the same year, and released At Budokan, and Heaven Tonight in 1978. (Interestingly, fans looked backwards at previous albums after their rise to superstardom adding to their sales , yet left the self-titled debut alone. For me, it’s the debut that is the best of the band.) 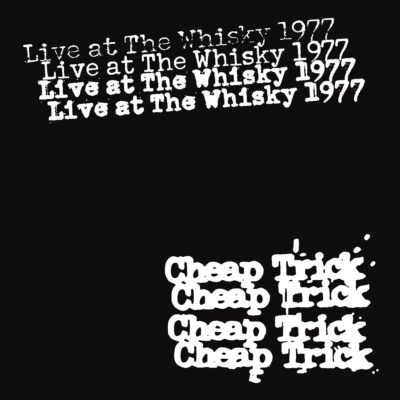 On December 16, Real Gone Music will release a 4CD Box featuring 4 sets of shows of Cheap Trick before their take-off. The period was 1977 and was performed to sold out crowds at LA’s Whisky venue. The band was introduced by the “Mayor of Sunset Strip”, Rodney Bingenheimer, then still firmly entrenched into the music scene of LA. The Box will be called Live At The Whisky 1977. The release will be limited to 2,000 copies worldwide.