In the later ’60s, Steppenwolf provided a strong blend of styles to appease many fans. With a heavy dose of hard rock, Steppenwolf marched on with a collection of best-selling albums, singles, and enough strength to be remembered decades later after their short but stacked classic era run. That era produced six Dunhill label albums and the memorable “Sookie Sookie”, “Magic Carpet Ride”, “The Pusher”, and “Born To Be Wild” singles, all within a three year span. But the band was still a powerful blend even afterwards with their Epic Records sets that extended from 1974-1976 when they released three albums – Slow Flux (1974), Hour of The Wolf (1975), and Skullduggery (1976).

On January 23 of 2023, Esoteric Recordings (Cherry Red UK) will release a time capsule clamshell Steppenwolf box that revisits the band’s later Epic Records period. Inside, are the three albums from the Epic period along with two bonus tracks. A booklet is packed in with a new essay, a mass of photos, and lots of remembrances. The box will be referred to as The Epic Years 1974-1976. 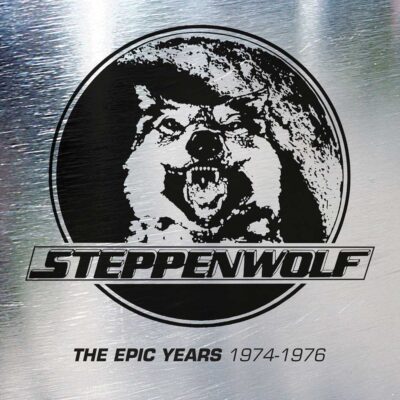