Carly Simon rose to popularity in 1970 with the release of her self-titled debut solo album. It contained the hit, “That’s The Way I’ve Always Heard It Should Be”, and paved the way for her Grammy wins for Best New Artist. She followed that up with a string of successes that included “Anticipation”, “A Legend In Your Own Time”, “The Right Thing To Do”, and the much-talked about “You’re So Vain”, among other hits that followed over several albums. There was little she could do wrong.

In April of 1995, she performed an unannounced show inside Grand Central Station in NYC. The show’s 15 performance songs were recorded and will now see release in a variety of formats including a Blu-ray of the set. Her charismatic performance skills will be in full bloom much as they were on Coming Around Again – Live from her Martha’s Vineyard performance. 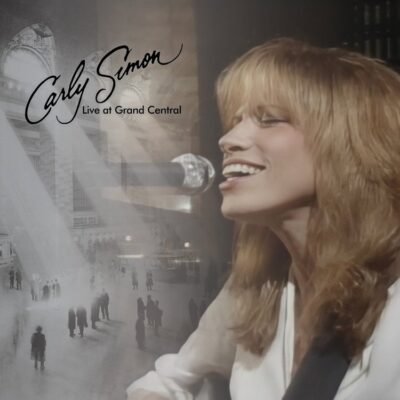 The set is to be called Live At Grand Central, and will feature 15 songs. It will be released on January 27 in 2023. It will be issued on CD, DD, two versions of 2LP (one set on standard black vinyl; the other pressed on color splatter vinyl, both on 145g-weight pressings). The live tracks have been remixed for this release edition. You can shop these formats here. Bundled sets are also available.

“Like A River” from the video can be viewed below.