The original Alice Cooper lineup brought an immense amount of fun to Rock and Roll from their evolutionary pathways leading to their last album, Muscle Of Love, in 1973. And while the moniker of Alice Cooper was eventually absorbed by the lead singer of the band for many solo sets, the magic of those ‘school days’ classics are still a love for many old Alice Cooper (band) fans.

Back in 2015, a record store owner convinced the band to ‘reform’ for an impromptu set that ended up as a documentary called Live From The Astroturf. This original band (minus Glen Buxton, who had passed away in 1997, but replaced here by Ryan Roxie) set put together 9 classic tunes along with onstage banter before each performance track. 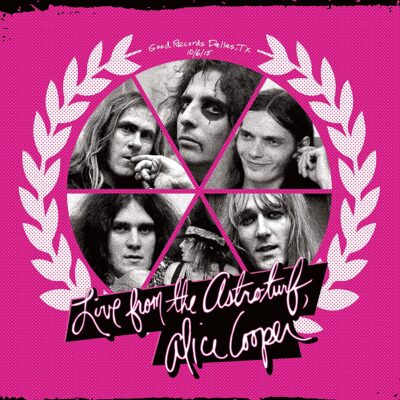 On September 30, earMUSIC will release a CD/BD combo of the set. The CD will hold the audio portion while the Blu-ray disc contains the original video documentary of Live From The Astroturf. a descriptive booklet is included.

Live From The Astroturf – Alice Cooper

BD
01 Live From The Astroturf documentary
02 Under My Wheels (video from film)
03 Interview with Michael Bruce, Neal Smith