Since the early days of Rock, Marianne Faithfull has been involved in one style or another. In effect, she has ejoyed two resurgences of her career. Her early foray was her entry with two strong UK sets. She released more while entrancing the US with her voice. Her first resurgence came with her best-selling album to date, Broken English, which attracted a New Wave audience that allowed many artists to create better originality than the hits-driven ’60s allowed for. She enjoyed a strong decade from 1979 through 1987.Her second resurgence came in the ’90s lasting through this current time.

On September 16, Marianne Faithfull will reward longtime fans with a 30 year collection of her music. The collection – being called Songs Of Innocence and Experience: 1965-1995 – will present a whopping 44 tracks, some of them previously unreleased and some being presented for the first time on CD. 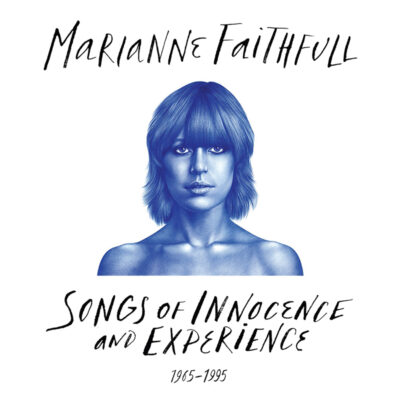 Songs of Innocence and Experience will be issued on 2CD, DD, and 2LP in standard black vinyl press.

CD1
01 Come And Stay With Me
02 What Have They Done To The Rain?
03 Once I Had A Sweetheart
04 Come My Way [version 2]
05 Go Away From My World
06 This Little Bird
07 Nuit D’ été [Summer Nights French Version] *First time on CD
08 Yesterday (live on the BBC)
09 Cockleshells (live on the BBC)
10 Green Are Your Eyes
11 Sally Free And Easy
12 Sunny Goodge Street [alternate take] (Previously unreleased recording)
13 The First Time (Ever I Saw Your Face) [Faithfull Forever version] *First time on CD
14 With You In Mind
15 Hang On To A Dream
16 Young Girl Blues
17 Hier Ou Demain (from the film Anna) *First time on CD
18 Is This What I Get For Loving You?
19 Don’t Make Promises
20 Something Better (Original 7” version) *First time on CD
21 Sister Morphine (Original 7” version) *First time on CD
22 It’s All Over Now Baby Blue
23 Chords of Fame
24 The Ballad Of Lucy Jordan [original mix]
25 What’s The Hurry [original mix]