The entity known as Emerson, Lake & Palmer has certainly enjoyed almost every aspect of audio upgrade that you can possibly imagine. From hi-res remixes, reissues, remasters, live box sets, and more (a path we’d widh that more bands took), ELP will not be denied their upgrades. 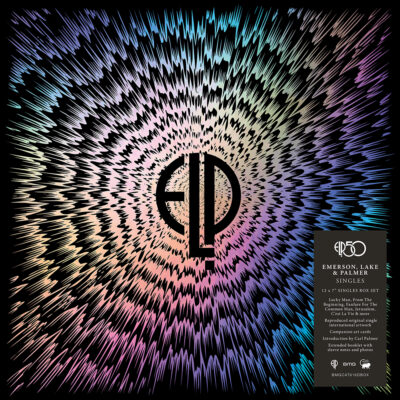 On August 26, ELP (via BMG Records) will present a boxed set of 7″ vinyl singles that span from their beginning in 1971 to their last in 1992. Overall, the box will contain 12 of the 2-sided 45s along with original international sleeves, a bonus 7″ neon pink art card signed by Carl Palmer, and a booklet with photos, notes, and a foreword by Carl Palmer. The vinyl singles will be stored in a durable 2 part box with the artwork priinted on holographic foil. The set  will be referred to simply as Singles.

Single 2 (Original Japanese Issue)
A. Stones Of Years
B. A Time And A Place​

Single 3 (Original Angolan Issue)
A. From The Beginning
B. Living Sin​

Single 4 (Original Portuguese Issue)
A. Jerusalem
B. When The Apple Blossoms Bloom In The Windmills Of Your Mind I’ll Be Your Valentine ​

Single 6 (Original French Issue)
A. C’est La Vie
B. Hallowed Be Thy Name​

Single 7 (Original US Promo Issue)
A. Brain Salad Surgery
B. Still… You Turn Me On​

Single 8 (Original German Issue)
A. Tiger In A Spotlight
B. So Far To Fall​

Single 9 (Original US Issue)
A1. I Believe In Father Christmas
A2. Jerusalem
B. When The Apple Blossoms Bloom In The Windmills Of Your Mind I’ll Be Your Valentine​

Single 10 (Original German Issue)
A. Canario
B. All I Want Is You​

Single 12 (Original UK Issue)
A. Affairs Of The Heart
B. Better Days