When we last heard from the UK Alt band, The Music UK (and they are good!), they had completed and released three excellent studio albums. Formed in 1999, internal issues led to their demise in 2011, with  their fourth album in the demo stage. Recently, The Music returned to do two shows, likely to gauge public interest in a reformation. The shows went off well and the Leeds Temple Newsam was recorded.

On September 2, The Music UK will release a full set of performance tracks to be called Live At Temple Newsam. It will include bonus live tracks from their Glasgow Barrowland. This is a great sign from a band whose last album was released over ten years ago. We can hope for a new studio set soon. 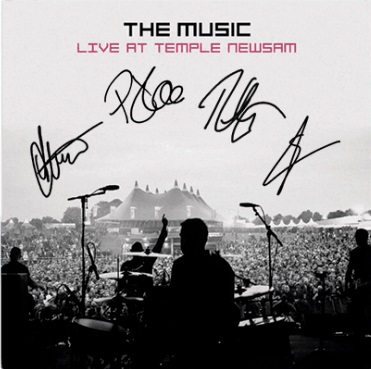 Live At Temple Newsam will be issued on 2CD, DD, and a Limited Edition gatefold 2LP featuring two separate discs, one in blue and and one in pink. There will also be a combined Deluxe edition with both the CDs and the LPs included. The LPs will provide DD rights. You can pre-order here.