If you remember Free, and Bad Company, then you know who Simon Kirke is. As a drummer for those two classic bands, Simon Kirke has well understood the blues and rock forms that made up the songs of both bands that he was affiliated with. Kirke has remained with all iterations of Bad Company alongside of Mick Ralphs. Their last official album was Stories Told & Untold issued back in 1996. Simon Kirke has been involved in another band named Lonerider. Their first album was Attitude, released in 2019. It has been favorably compared to the sound of Bad Company. Lonerider consists of heavy-grade rockers with Kirke on drums, Steve Overland (FM) on vocals, Steve Morris (Ian Gillan Band/Heartland) on guitars, and Chris Childs (Thunder) on bass guitar.

On June 10, Lonerider will release their next album – Sundown. It will feature 14 new songs (while 14, four are split in exclusivity for CD and LP editions).  Lonerider has released their first single from Sundown – “Fantasyland” (heard below). 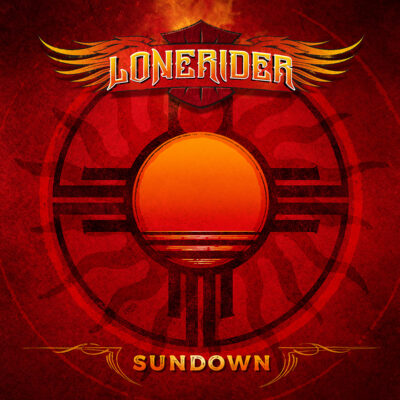 Sundown will be released on CD, DD, and smokey-color limited release on vinyl LP (500 copies, all numbered with full band autographs). The first 500 CDs sold will feature the same numbered and autographed postcard for authenticity.