Blues great, Taj Mahal, and musician extraordinaire, Ry Cooder, once teamed back in 1967 when Ry was only seventeen. The years after has brought acclaim and great music to and from these two greats.

On April 22, Nonesuch Records will release a collaboration between the two called Get On Board: The Songs Of Sonny Terry & Brownie McGhee. Sonny Terry and Brownie McGhee were renowned American Blues artists with Sonny Terry on harmonica and Brownie McGhee on guitar. Together, they left the world with a library of music. With Taj Mahal and Ry Cooder revisiting their music, we as audience get to be blessed with a combination of Terry/McGhee songs as interpreted by Mahal/Cooder. 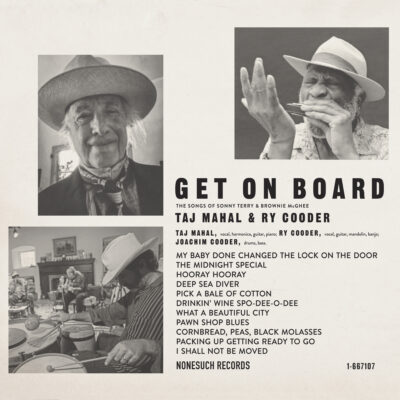 Get On Board will feature eleven tracks and will be released on CD, DD, and vinyl LP. A song from the new album is “Hooray Hooray” and can be heard below.

Get On Board: The Songs Of Sonny Terry & Brownie McGhee – Taj Mahal and Ry Cooder
01 My Baby Done Changed the Lock on the Door
02 The Midnight Special
03 Hooray Hooray
04 Deep Sea Diver
05 Pick a Bale of Cotton
06 Drinkin’ Wine Spo-Dee-O-Dee
07 What a Beautiful City
08 Pawn Shop Blues
09 Cornbread, Peas, Black Molasses
10 Packing Up Getting Ready to Go
11 I Shall Not Be Moved