AXE was an American-based metal band formed back in the late ’90s, entering into the wave of heavy metal bands that helped formed one of the frame sides of the ’80s. They released four albums from 1979 through 1983. MCA Records issued AXE (1979), and Living On The Edge (1980), while Atco released Offering (1982), and Nemesis (1983). The band disbanded after Nemesis largely due to a tragic auto accident that claimed the life of Michael Osborne, and badly injured Bobby Barth. They have since released three more albums over a period of 23 years.

On December 24, Cleopatra Records will release a 4CD Boxed set that only presents the band’s first four albums. The box is a clam-shell case with the CDs being housed in a wallet sleeve. A 16-page booklet is included that features photos, credits, and new notes. The Box is being called AXE: The Albums 1979-1983. 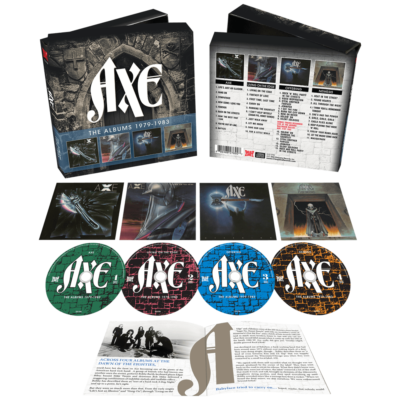 Late in November, Cleopatra re-released Living On The Edge on Limited Edition color vinyl in two separate colors – Red vinyl, and Blue vinyl. A collection was also issued via Cleopatra called Rock N’ Roll Party In The Streets on both CD and black vinyl LP.