The U.K. Subs entered the stage in 1976 and helped invigorate the Punk movement with their own brand of raucous rock – UK-styled! With a heavy revolving door of musicians, only Charlie Harper remains as an original member. It is fair to say that Alvin Gibbs, who came aboard in 1980, is still with the band. Over their band-span, they’ve released 22 albums, although the first three are what held the growing UK punk scene in thrall. With a Punk scene still with us, albeit in a more Pop form, the U.K. Subs remain as one of the classic bands of the original Punk era. 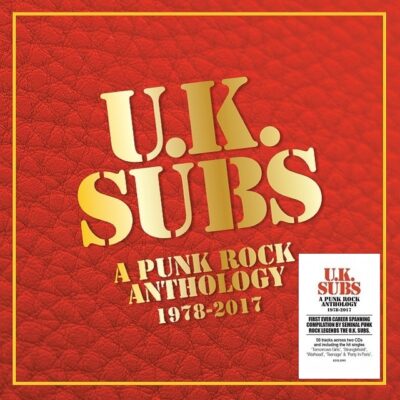 On November 12, a 2CD anthology set filled with 56 tracks will release to remind us of the excellence of the band’s early years with hit singles inclusions, and the swath of tracks from their after-peak years. The energy is still there even if the hit singles are not. The set is being called A Punk Rock Anthology – 1978-2017, covering 39 years of expressive music. It is being released via Edsel Records (UK).

A Punk Rock Anthology – 1978-2017 will be released on 2CD, DD, and color 140g-weight vinyl (individual red and yellow discs) that will offer 34-tracks. The 2LP package is planned for December 3.

The Chi-Lites Get 2CD Compilation: Too Good To Be Forgotten