Back in the ’80s, when the world of music was in a constant but consistent state of flux, many bands expanded the kind of music that we listened to. One of those bands – Black Tape For A Blue Girl – found success in a new shape-shifting genre, darkwave. Incorporating the elements of classical, folk, and ambient music, Black Tape For A Blue Girl stirred the soul with a melancholy that embraced many things found in our lives. 35 years later, the band is still producing music. Over the years, and under the guidance of Sam Rosenthal, Black Tape For A Blue Girl has focused on several styles and weaved them into classic albums. Their last was to touch the milky way, released in 2018.

A new album has been recorded and is currently being funded via Kickstarter. With just three days to go, and funding at 92% of goal, the project is near readiness. (To assist in funding, go here.) The new album is being called The Cleft Serpent. The craft of the new album is shared by three profound artists: Sam Rosenthal, Henrik Meierkord, and Jon DeRosa. The album will come with 8 new tracks. It will also provide a exclusive 13-instrumental track CD as a bonus.

Black Tape For A Blue Girl has always experimentally and lushly explored the concepts of love, sadness, and a world of hurt via their adopted styles of music. The Cleft Serpent will be no different in its new explorations. 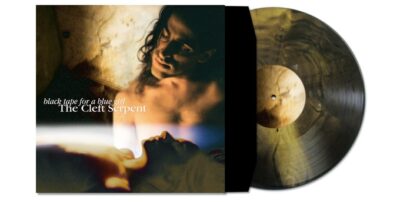 The Cleft Serpent is planned for 2CD, DD, CS, a limited edition galaxy swirl-colored LP, and MD (Mini-disc!) Its intended arrival date is unknown at this point. You can preview three tracks at their Bandcamp page.