There are many, many fans of Meatloaf and his classic Bat Out Of Hell album collection and their follow-ups. And everyone knows about Jim Steinman and his essential contributions to those albums. Some of you might know a bit about the recorded duet of “Paradise By The Dashboard Light” with a powerful female vocalist, who’s name is Ellen Foley. Ellen Foley worked into the solo limelight with solo releases that include her excellent covers-drenched debut, Night Out. On that album is an excellent rendition of The Stones‘ “Stupid Girl” (hear below). 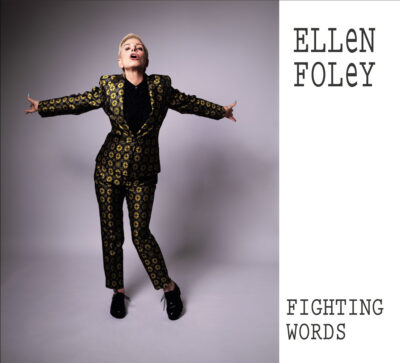 Her career produced four Epic Records releases, three released during her active period, and one issued not too long ago in 2013 called About Time. Ellen Foley has sung with Meatloaf, Ian Hunter, Joe Jackson, The Clash (The Clash‘s “Should I Stay Or Should I Go” is reportedly written about Jones and Foley’s relationship), and Blue Oyster Cult. The Clash factor heavily on her second album, Spirit Of St. Louis (1981).

On August 6, Ellen Foley will release her fifth album. It will be called Fighting Words and will contain eleven new tracks. Fighting Words has a first single out, “I’m Just Happy To Be Here” (hear below). Interestingly, the girl (Karla DeVito) who replaced Foley for the video of “Paradise By The Dashboard Light”, as well as on tours, is heard on the new single in a duet with Ellen Foley.

Fighting Words is being released on CD and DD.