Sweet To Release Isolation Boulevard On CD and LP

Recently, Angel recorded a fresh new album that included a nice re-recording of “Tower”, a song from their debut album in 1975. Re-recordings are nothing new. And some present a fresh new audio approach. Take Joni Mitchell‘s re-recording of “Both Sides Now”. The newer song is just as important as the original. Carly Simon once recorded a new album of re-recordings of classic Carly hits from the past. And it worked nicely. Now, Sweet, a glam band from the ’70s will release an album of re-recorded songs from the band’s 1974 set, Desolation Boulevard. These days, only Andy Scott remains, (the other three from the classic era have passed on). 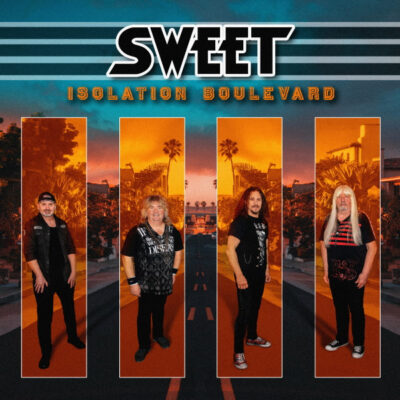 On June 4, Sweet will release their latest album, Isolation Boulevard. Previously in release as DD, the album is scheduled for CD and vinyl LP incarnations. It’s an album of re-recorded hits from the peak years of the original band that includes “Fox On The Run”, “Ballroom Blitz” , and “Love Is Like Oxygen”. Surprisingly (to me) “Little Willy” isn’t included. The original track was a big hit in the UK.

A song from the new album is in current release. you can hear “Set Me Free” below. The song is presented in a more current hard rock style indicative of the times.