TAPside, we get a lot of music to listen to from largely unknown artists. Typically, as you can imagine, may of them are average. But once in a while, my ears perk up a bit even if everything isn’t always put together well. These moments give me lists to build and names to watch. One of them is an album by Nick Perri & The Underground Thieves.

Nick Perri isn’t your average guitar slinger trying his stuff out on an independently-released album. He has some history. Perri has played professionally with such names as Perry Farrell (Jane’s Addiction), and Matt Sorum (Guns & Roses). His original band was Silvertide, who toured with such bands as Van Halen, Motley Crue, Aerosmith, ZZ Top, and Foo Fighters. So there’s a lot of credibility that goes with his name.

Sun Via is Nick Perri‘s debut album. Playing with the five-member The Underground Thieves, the album lists ten songs, all with a heavy ’70s hard rock influence.  One of the things that stand out is Nick’s guitar. He has a firm command of his skills and puts them on stage in all of the songs of Sun Via. 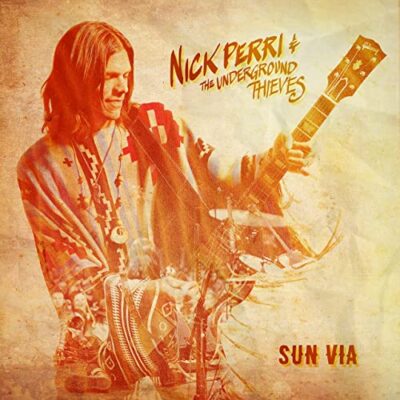 The opening track is also the album’s single, “Feeling Good”. It has an Aerosmith vibe that pushes you forward to the next tracks. Notable tracks include “Daughters & Sons”, “Excess”, “Everybody Wants One”, and the funky “Let You Know” (which should be a single). “5.0.1.” is a 4-minute instrumental live jam that resonates the ’70s with ease.

The Underground Thieves are not to be dismissed here. They more than carry their weight in the album.  In fact, it is their contributions that help make Sun Via a complete listening experience from the start to the last track.

In a time when the market is extraordinarily crowded with talent, Nick Perri‘s debut album is a pulsing, raucous, and hard-edged release. If these boys were around in the ’70s when these kinds of songs proliferated, they may well as been a strong draw.

You can explore more at nickperrimusic,com.