The heydays of Stiff Records and their stunning stable of artists led to a worldwide bear hug’s acceptance of most artists on the label. Elvis Costello. Nick Lowe. The Damned. Lene Lovich. Rachel Sweet. Ian Dury.

Ian Dury, sadly now passed, may not have received the same widespread love that Elvis Costello and Nick Lowe, or even The Damned had. But he and his band, The Blockheads received a nice helping of it to be sure.  With the release of Ian Dury’s 1977 debut on Stiff Records (New Boots and Panties!!), the news was out that a heavily accented singer (from Essex) and his band was about to deliver an enduring anthem with the album’s standout track, “Sex & Drugs & Rock & Roll”. The album itself was chock full of enduring songs, ten wonderful tracks full. The album went platinum in the UK. The rest of the world somewhat snoozed. Over the course of his musical career (Dury died in 2000 at the age of 57), he released 10 studio albums including the posthumous issue of Ten More Turnips From The Tip.

The release of the 3CD collection of Hit Me! The Best of Ian Dury celebrates the music of Ian Dury with a nice rounded out compilation of 50 songs mostly derived from the all of his albums. There is a demo and a live track added to the 48 originals. Released by BMG Records, the selection is broad and essential. I’m not only pleased with the arrival of Hit Me!, but I enjoy the selection of tracks for this set. 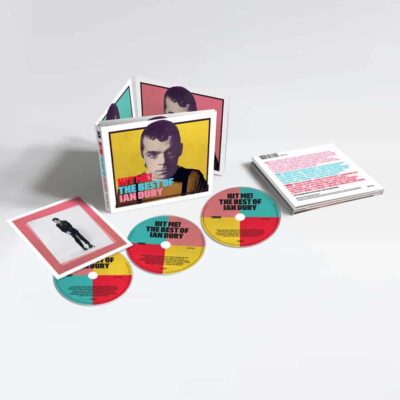 A 12-page booklet is packed in with a few nice photos of the celebrated punk singer that helped take the music of punk to a different place. A short insightful and heartfelt essay by Phill Jupitus reminds us all that if we’re fans, then we are blockheads, too! In the essay, a few tracks are commented on extracted from a past visit with Ian Dury. Two pages of memories in the way of album and single covers are in the midst of this booklet.

Three CDs seem a lot for a relatively obscure artist that helped to highlight an all too brief period of changing Rock and Roll. But for some of us blockheads, we couldn’t be happier. If you remember Ian Dury and his Blockheads, then this set on either CDs or LPs is a warm trip down memory’s all too narrow lane. If you have barely the idea of who Ian Dury is, there is no better introduction than this set. And if you are aware of the anthem, “Sex & Drugs & Rock & Roll”, Hit Me! The Best of Ian Dury is an invitation extended to discover the music that handsomely accompanied that classic track. 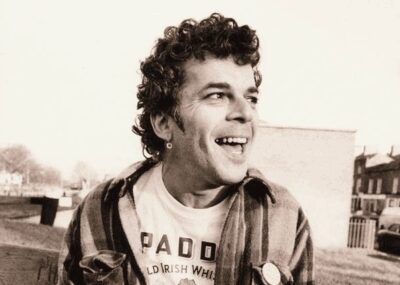 Deeply recommended. (I was fortunate to have seen Ian Dury on the road for his New Boots & Panties!! tour. I still remember it well!)