Annie Lennox of The Eurythmics found solo success with the 1992 release of her debut, Diva. The album provided for five singles and itself sold well over 10 million copies. With her follow-up, Medusa (1995), she did just as well. Only four albums in, Annie Lennox celebrated the holidays with the release of her 2010 Christmas album, A Christmas Cornucopia.

A Christmas Cornucopia contained 12 classic/traditional holiday songs sung in her inimitable voice, and one Lennox original song (“Universal Child”) for the set. 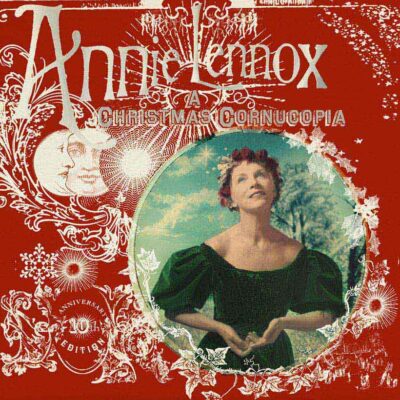 On November 20, Verve Records will reissue the 2010 Lennox classic in a 10th Anniversary Edition just in time for the holiday period…just in time. This new edition will be digitally remastered and will contain a changed cover. But the best part of the album will be the inclusion of a brand new Annie Lennox track recorded exclusively for this set. The song, “Dido’s Lament” is a 17th century classic arranged by Annie Lennox for this set.

In addition to the inclusion of the new song, and new artwork, the album will rearrange the original track-list to achieve a fresher approach. A Christmas Cornucopia 10th Anniversary Edition will be released on CD, DD, and vinyl LP (black).