Marilyn Manson has flirted the edge of decorum with a bundle of album releases, some more shocking than than the one before it. Marilyn Manson had achieved a modicum of success with Portrait Of An American Family (1994), but hit his stride with the seven million-selling Antichrist Superstar album in 1996 with the high-impact single, “The Beautiful People” from it. Since, Marilyn Manson has experimented with style and sound, releasing ten studio sets in all. 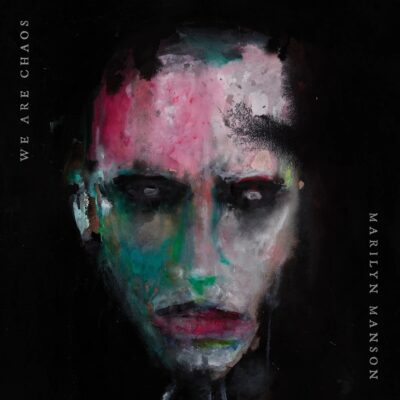 On September 11, Marilyn Manson returns with his eleventh album, We Are Chaos. It will contain ten new songs including the current single of the title track (see track-list and hear single below). The song, “We Are Chaos” reveals an interesting new sound from the shock master. Worth listening to.

We Are Chaos will be released on CD, DD (as MP3, FLAC, and WAV), three color editions of 180g-weight vinyl collector LPs (one in Hot Pink shimmer, another in multi-color splatter, and one a picture disc featuring the cover), a clear silver glitter cassette, and a handful of specialized bundles available on the band’s site (here). These are being released via Loma Vista Recordings.