Spirit was a part of the California culture back in the late ’60s and during parts of the ’70s. Like many bands, they developed enough of a fanbase to be cult favorites. Over their years, they released fourteen studio sets. But after the band’s fourth album, Twelve Dreams of Doctor Sardonicus, Spirit was  hardly the same band twice. But as Spirit of ’76 proved, they could still make good music. They ended with California Blues, released in 1996. Randy California would die shortly after its release. 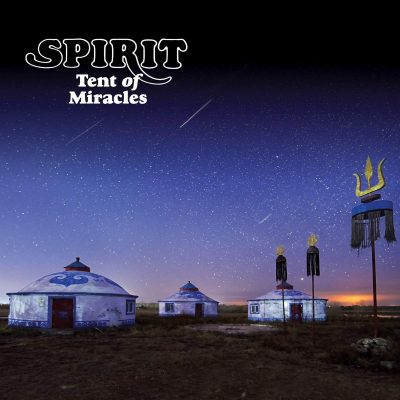 On April 24, the cool label at Esoteric UK will reissue the 1990 Spirit set, Tent of Miracles. This album featured Randy California, and Ed Cassidy, with the addition of Mike Nile for a satisfying 12-track set. Esoteric revisits Tent of Miracles in a 2CD Remastered and Expanded package that builds on the original with nine previously unreleased bonus tracks that include demos, outtakes, and a few live tracks. The second CD will contain a previously unreleased live set from 1990, performed at The Melkweg in Amsterdam on March 13, 1990. The included booklet will have photos, new notes, and other important parts pertaining to this album.