Fleetwood Mac Classic, Then Play On, To Get Celebration Edition

Fleetwood Mac‘s third studio set, Then Play On, was released in 1969. That’s a full six years and seven studio albums before the highly successful version of Fleetwood Mac that employed Lindsay Buckingham, and the enigmatic Stevie Nicks. The Then Play On era had Danny Kirwan, and Peter Green‘s last appearance to undergird the classic performances. 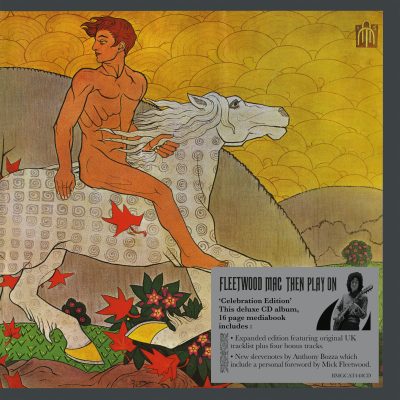 On June 5, BMG Recordings will celebrate the fifty year anniversary of the classic Fleetwood Mac album with a Celebration Edition. This Deluxe Edition set will feature the original UK tracklist along with four bonus tracks. A 16-page booklet will add new photos, new sleevenotes, and a “personal foreword” by Mick Fleetwood for the Celebration Edition. the music will feature the 2013 remaster from its last Deluxe Edition release via Rhino Records.

The Celebration Edition of Then Play On will be re-released on CD, DD, and vinyl LP.

Then Play On (Celebration Edition) – Fleetwood Mac
01 Coming Your Way
02 Closing My Eyes
03 Fighting For Madge
04 When You Say
05 Show-Biz Blues
06 Underway
07 One Sunny Day
08 Although the Sun Is Shining
09 Rattlesnake Shake
10 Without You
11 Searching For Madge
12 My Dream
13 Like Crying
14 Before The Beginning
Bonus Tracks
15 Oh Well (Pt. One)
16 Oh Well (Pt. Two)
17 The Green Manalishi (With The Two Prong Crown)
18 World In Harmony