1975 brought the eponymous album release by Angel. Released on Casablanca, the band delivered a hard rock style with an angelic image. Eventually, their logo was designed to reflect a stylish view to the name, reading the same rightside up, or upside down. The first album gained a fair amount of fans. By the arrival of their third, On Earth As It Is In Heaven, they gained a minor hit with “That Magic Touch”. Angel released six studio albums with the first five from the classic period for them. (Angel is also another band that my younger brother, Mark, introduced me to.) 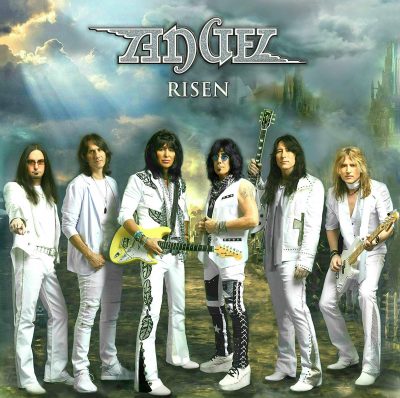 On October 4, Cleopatra Records will release the new Angel album, Risen. The new set will contain seventeen songs, two of them are re-recorded (“Tower”, “Angel (Theme)”) from their debut. Risen will be release on CD, DD, and 2LP white-colored vinyl in a gatefold jacket.

Angel now consists of original members, Frank DiMino, and Punky Meadows. The other four members are new additions (since 2018) for this release.  A single from the upcoming album is now available, “Under The Gun” (hear below).