Lou Reed has become one of Rock’s most enigmatic stars, equalled by few. His reticence with the press is legendary. But his affiliation with those whom he had great respect for were strong. In some cases, like with Nils Lofgren, a collection of songs were collaborated on. As the story goes, Nils Lofgren had written songs that he brought to Lou Reed’s attention back in 1978. Nils expressed a concern for the lyrics and gave them to Lou to “polish”. Some time later, Lou Reed returned with a finished gloss. Lou Reed ended up using three of those tracks for his The Bells sessions, while Nils Lofgren used five over three albums. Originally, thirteen songs had been collaborated on. With only eight in use, that left five previously unheard. After a moment of clarity for Nils, he decided to bring those unreleased tracks together in a new album called Blue With Lou, which was issued in April of 2019.

I’ve been both a great fan of Lou Reed and Nils Lofgren throughout both careers. With songs that are familiar, I found it necessary to revisit Lou’s “City Lights” with Nils’ new version. As it goes, “City Lights” is a favorite of mine from Lou’s The Bells album. In that new track, Nils delivers a fine performance. The delivery is much more jazzy, but still a beauty to enjoy.  The rest of the album delivers some more of the Reed/Lofgren compositions in their original recordings for Nils Lofgren. All of them smoke with the intensity that Nils effortless provides with his music. “Attitude City” is one of those strong ‘previously unreleased’ tracks that provides the listener of this album with a sparkling diamond that’s easy to take out of the drawer for repeat inspection. 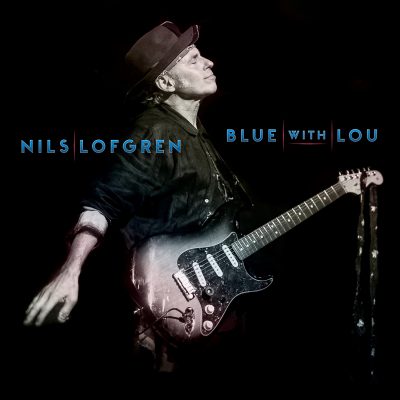 For Blue With Lou, there are six other songs completely unrelated to Lou Reed but fit the set making this album more a Nils Logren solo issue. And that’s just as it should be. “Dear Heartbreaker” remembers Tom Petty for a great tribute track. Nevertheless, the five unreleased Lofgren/Reed tunes are included here as well as the brilliantly reworked “City Lights”. Combined, Blue For Lou is a remarkable album of history, great composition, and superb music from a musician that deserves more accolades than has been given him.

If you’re a Nils Lofgren fan, Blue for Lou displays the smoking guitar music that Nils is known for, along with the bonuses throughout. You’ll not go wrong with this album. every facet of this diamond reflects a world of color and light.