Jethro Tull is representative of classic ProgRock as much as Yes or even ELP. In their own delivery, Jethro Tull performed well throughout a richly changing musical landscape, never compromising who they were, but staying current to the changes that worked within their structure. With twenty solid JT titles currently available, it’s always grand news to find that Steven Wilson has finished yet another remix of a Jethro Tull album from the classic period. 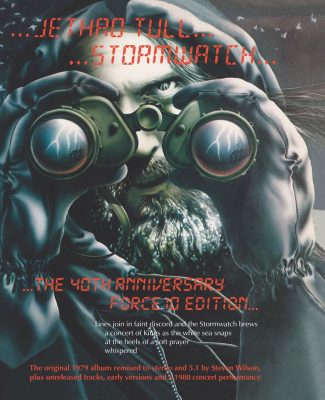 On October 18, Rhino Records and Parlophone help Jethro Tull celebrate the 40th Anniversary of Stormwatch, JT’s 12th studio classic, released in 1979. With this 6-disc Force 10 Deluxe Edition that features a Steven Wilson remix of the original album, we come closer to completing remixes of the Jethro Tull catalog for as far as Steven Wilson is willing to go with them.

The 6-disc set offers the original album remixed on CD1, and a batch of newly remixed bonus tracks for CD2. CDs 3 and 4 provide a complete JT concert set from 1980. The final two discs are both DVDs. They contain the remixed album in high resolution Stereo, and 5.1 Surround Sound.