Black Sabbath certainly – and heavily – contributed to the metal style that was taken to innumerable styles and levels after them. Using society, politics (and their numerous wars), and other things as their sources, they presented a potent form of representative art to express not only their discontent but ours as well. Of course, it certainly helped that the band was entertaining and great musicians. Over time, and with several excellent lineups that included the inimitable Ozzy Osbourne, Ronnie James Dio, and Ian Gillan (among others), Black Sabbath delivered a healthy collection of 19 studio works, and a few live sets. Many of those are considered classic, especially those issued during the Ozzy era. 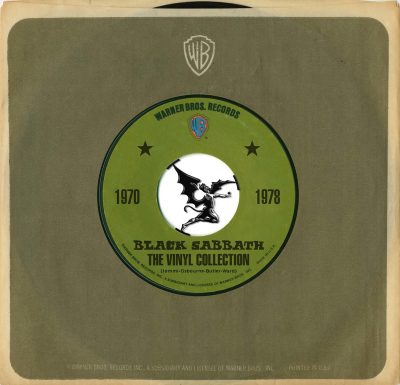 On September 6, Rhino Records will re-release a by now depleted 2012 run of the 9LP Box called The Black Sabbath Vinyl Collection 1970-1978. This re-release that provide new standard wax pressings of all Ozzy Osbourne-era Black Sabbath titles. Included with those eight studio titles is the Live At Last set, and a 7″ vinyl single. For this pressing, a new cover for the box is being offered (so it appears).

For those that missed this box, or hadn’t gotten into (or back into) vinyl before this earlier release, this is a chance to get on the wagon.