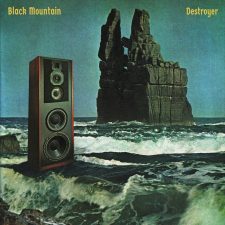 Black Mountain is a Canadian band used to specializing in the neo-psychedelic rock resurgence that has successfully swept the world for fans of this genre. Since 2005, Black Mountain has released four albums. Of these, In The Future (2008)  has received the most attention for its classic sound and collection of great songs. Their last was IV (2016), issued six years after Wilderness Heart (2010). This is a band who likes to take their time but always delivers an excellent album when they’re ready. With the release of their latest, Destroyer, the band refines their sound further by forays into some metal territory as heard during the eighties. Overall, they’ve hardened their classic sound with rougher edges.

Destroyer puts eight new songs into your head with elements of metal, their expected and unique psych sound, as well as a distinct combative guitar attack that could have helped them rule the stage in the ’80s alongside bands like Judas Priest, and any of the other popular metal bands of that era. It starts out with “Future Shade”, a track that is all high-powered guitars with subtle synth traces of psychedelia to “spiff” it up. “Closer To The Edge” borrows a theme from Yes with the title but keeps the message fairly non-verbal with only “…we’re living close, close to the edge, close…”. It’s dystopian with a feel of annihilation within its progressive skin remaining short in play length. “Boogie Lover” lays on heavy bass and delivers a synth stream giving it a prog-like heartbeat. Personally, I love the late ’60s feel of “Pretty Little Lazies” that fits the psychedelia sound of that time even as it ‘punks’ up parts of the song. “High Rise” goes for the same late ’60s sound as well.

All in all, Black Mountain delivers another strong work even as they have lost hard-currency founding member, Amber Webber, (who REALLY needs to do a solo album), and original drummer, Joshua Wells. (Webber and Wells currently form Lightning Dust and are at work on a new album.) Destroyer is a fine album that will satisfy all Black Mountain fans. With new members on board, the band shows that they still have a trick – or five – up their musical sleeves.