Two things often happened during the incredibly fertile music scene of the early ’70s (not unlike today with a blast of bands trying for the GOLD) . One of them was a legitimate claim to fame that many bands lost out on due to misunderstanding or no label interest. The other is that Kim Fowley was clearly an insertion into the LA Rock scene. Prior to Fowley’s success with The Runaways and a minor hit with The Quick, Fowley fashioned the Hollywood Stars.

The Hollywood Stars were assembled and promoted as a West Coast answer to the New York Dolls, a tall order indeed. It would be many years before worth of the NY Dolls would be understood. Butt at least they had two albums in release. Hollywood Stars were briefly signed, then jettisoned by Columbia Records before an album could be released to give the band their legitimate shot. Eventually, internal issues would close the chapter on the band.  If you followed any underground news about emerging bands in NYC and LA, hen you have no doubt read about The Hollywood Stars. 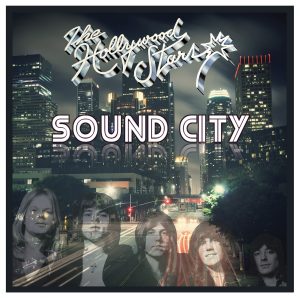 On August 23, Burger Records will release a ten-track album from the band recorded back in 1976. The album is called Sound City. This album represents music as recorded by the second iteration of the band. Time eventually provides an inroad to wrongfully forgotten or ignored bands of the past. Thankfully, those of us who were interested in not signed emerging music get a chance to have a nicely represented album of classic music from another time when reckless youth was the dominant factor.