Gordon Lightfoot To Get 2CD Singles Collection, The Complete Singles 1970-1980

Since the ’60s, Gordon Lightfoot has been giving fans his unique folk-styled tunes. It wasn’t until his breakout hit, “If You Could Read My Mind” from his fifth album, Sit Down Young Stranger (1970) that elevated his music to Top 40 status. After, he would produce more Top 40 singles with “Sundown”, “Carefree Highway”, “The Wreck of the Edmund Fitzgerald”, “Rainy Day People”, “Summertime Dream”, “Race Among The Ruins” (the last three off his extraordinary Summertime Dream (1976) classic, and followup hits like “The Circle Is Small”, “Daylight Katy”, and a string of classic singles that bubbled within the Top 100. Fans, however, didn’t know singles. They loved every track on each album. 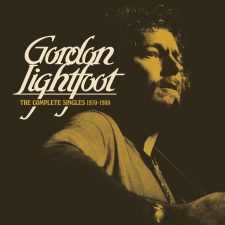 On March 1, Real Gone Music will release a 2CD set of collected single from Lightfoot’s most fruitful period, 1970-1980 when Gordon Lightfoot released 34 A and B-side singles, some that are quite familiar to Top40 listeners for both Reprise Records and Warner Brothers Records.

The 2CD set is being called – simply – The Complete Singles 1970-1980. All tracks have been newly remastered and highlight every single recorded with Lenny Waronker (and briefly, Joe Wissert), who helped fuel the successful singles of Gordon Lightfoot.

The included booklet will feature an insightful essay, notes, photos, and credits.