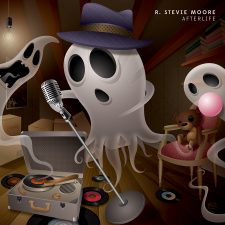 Afterlife, the latest studio recording from post-pop auteur R. Stevie Moore will be released by Bar None Records on February 22.

Moore is widely considered to be the godfather of the DIY recording aesthetic. Dubbed a “lo-fi legend” by the New York Times, he started his career in the late ’60’s, gaining widespread underground recognition during the ’70’s punk explosion. Anticipating the viral internet era, Moore made innumerable cheap, but brilliant, videos. Luckily, many of them eventually found their way to YouTube where a whole new generation of fans discovered his work, including the likes of MGMT, Mac Demarco, The Vaccines and collaborators Ariel Pink and Jason Falkner.

After a stint playing with a later line-up of The Coasters and trying his hand as a Nashville session player, R. Stevie realized he wasn’t cut out for the life of a conventional working musician. As he said in the documentary film, I AM A GENIUS (AND THERE’S NOTHING I CAN DO ABOUT IT) “So boring. It was not me at all. If you have to work a day job, what could be better than doing music even if you hate it?  At the same time, I started smoking pot as a twenty year old and I’m playing this acid rock on headphones and reel to reel recorders… It just exploded!”.

He’s recorded literally hundreds of albums, including the classic Phonography and Delicate Tension, releasing them via various labels, as well as on his own on handmade cassettes and CDR’s.