I don’t know if I’m old but this didn’t seem that long ago. And only old people say that. 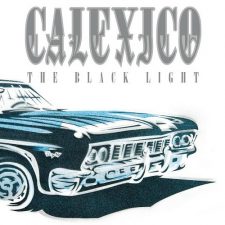 It was 1999, maybe 2000, apparently. The venue was Maxwell’s, an infamous Hoboken, N.J. haunt with a decent bar (stiff pours) and a small, sound-proofed black room in the back for bands to make a clatter. Calexico, then a small Quarterstick off-shoot of Giant Sand, was touring to support its second LP, The Black Light, and already playing songs from Hot Wire. The group, appearing with horns and all, played the songs you’d expect them to play, as well as rousing covers of Peter, Paul & Mary and The Minutemen; the night was electric, the band was swinging and the crowd ate it all up. You knew then that Burns and Convertino were in this for the long haul. Sparks like that don’t fly without catching wind.

Well, it’s been a couple decades, and leave it to Touch-And-Go and City Slang to commemorate the excitement of the period with a 20th anniversary edition of The Black Light. The double-LP, out last week but on the radar for some time, is a beautiful little thing, lovingly presenting the original tracks alongside some mixes and B-sides. It’s on 180 gram clear vinyl, et cetera, et cetera, et cetera. It’s a deluxe package – you get the idea. If you’re a fan, you’ll want this. If you’re not, it will show you what you’re missing.

Though The Black Light never really left my radar – “Bloodflow,” a wondrously slow boil in true form, is definitely one of my favorite Calexico songs – it’s interesting hear just how cinematic the boys sounded all those years ago. Burns and Convertino have matured nicely; their recent outings on ANTI- are ripe fruit. But they had the format down in 1998, no question about it. And, for all the mood-setting – the outtake “Drape” and the weepy closer “Bag of Death” are must-hear must-hear must-hear – there were great, great songs on the disc: “Bloodflow,” “Minas De Cobre,” “Sprawl,” “Stray.” For a record with 19 tracks, there weren’t a hell of a lot of dead spots on the airwaves.

The new record’s richness will not come as a surprise to anyone who’s collected the in-between-affairs tour EPs or slapped down the cash for that Touch-And-Go box-set a few years back. You’ll get some interesting takes on “Minas,” a great “Bloodflow”-ish “Lacquer,” and so on. The re-mastering on the original audio sounds great. But this isn’t about surprises – or, as a fella said, Houdini-like disguises. This is about turning back the clocks on one of the great alt-something or Americana-influenced or desert-cinema or whatever you want to call them bands of their day, and taking in that air. All these years later, I still can smell the sweat from that back-room in Hoboken. If you wish you were there, too, you’ll hunt this down and trace back Calexico’s origin story to 1998. It’s a trip.