There’s this piece of ephemera from the days of the Rachel’s ensemble that sticks to the attic of my mind like so much setting rubber cement – let’s call them the scrolls. Far from biblical or Talmudic or scriptural (in a sense of religiosity, at least), they were large sheets of paper on which members of the acclaimed, Louisville-bred post-classical group would do a form of “transcription,” adding notes of timbre, personal recollections, photos, inside jokes and the like. Think of it as shining a light onto the inside of the composer’s skulls — if only we fans could get our hands on such things. 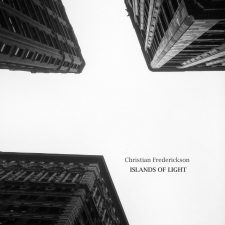 The band’s final full-length LP – 2003’s brilliant epic Systems/Layers, a piece of music as much as a piece about the making of music — would have provided a hell of a lesson in a reading of the scrolls; but it is on the group’s final outing (the hard-to-find EP Technology Is Killing Music) that they truly mastered the art of pastiche and self-conscious/self-aware construction. On that EP, they blended, cut and stapled together found sounds and chorales and movements and crescendos in ways that bands at that time – I’m thinking mostly of the Canadians Godspeed You Black Emperor! – only were hinting. (It was a majestic little journey, well worth your efforts to track down in form physical.) Well, Christian Frederickson, one of Rachel’s founding members, clearly is in on the art of that method because today he released Islands of Light, a one-track EP that echoes Technology in form if not in scope.

A collection of suites written in 2017, the 21-minute track is a kind of comment on the passing of time, with Frederickson’s viola and accompanying atmospherics, piano, electronics, percussion, et cetera, adding notes of mystique, drama, and, perhaps most poignant, melancholy. 2017 was the year Frederickson released the final LP he recorded with the late Jason Noble, a Louisvillian of the highest order and the second founder of Rachel’s, and hints of The Painted Bird, on which the duo worked together with percussionist Ryan Rumery, lingers throughout. It is appropriate and touching that Noble’s memory continues to inform him.

It is diminishing, however, to catalog the track’s way of ebbing and flowing. Instead, it must be witnessed in real time. Luckily for all of us in the modern world, there’s this little thing called Bandcamp, where, for a deposit of $5 or more, you can do just that, listening to the ups and downs in one man’s year of life in less time than it takes to watch an episode of your favorite sitcom. There are moments on the track where Frederickson’s viola soars, seeking closure or expressing a kind of longing; elsewhere, it provides texture, a kind of background to the passage of events or narratives blazing in front of it. Either way, it’s beatific stuff, quite possibly some of the most riveting string work you’ll hear this year. And, while its colors are not painted as grandiose as Technology Is Killing Music, it is a worthy successor to that long-lost gem, and one any true Rachel’s fan would be thrilled to experience.