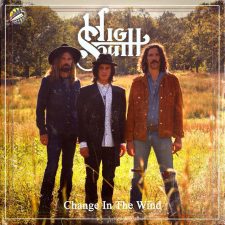 With impressive three-part harmonies, a dedication to songwriting and unwavering optimism, the Nashville-based band High South has developed a dedicated following across Europe, where they’ve been touring regularly since 2015. Now they’re breaking into the American market with Change In The Wind, a captivating project that draws comparisons to Crosby, Stills, Nash & Young, The Doobie Brothers and The Band. High South teamed with producer Josh Leo, known for his work with Nitty Gritty Dirt Band and Kim Carnes, engineer Niko Bolas (Neil Young, Warren Zevon), guitarist Jack Pearson (The Allman Brothers Band), keyboard player Tony Harrell (The Flying Burrito Brothers), drummer Nir Zidkyahu (Genesis) and singer Raul Malo (The Mavericks) to create the six tracks that make up Change In The Wind.

The group – composed of Jamey Garner, Kevin Campos and Phoenix Mendoza – sum it up this way: “As vocalists, we are always drawn to harmony. It’s such a naturally pleasing sound that we’re absolutely hooked on — and it was never more prevalent than the 1970’s. Every kid learns from their environment and we were all fortunate to have parents that exposed us to the music of this era. In a sense, it’s in our soul.”

Although the band released several singles internationally, through Universal Germany, A Change in the Wind is their first release with distribution in the United States. The project’s empowering lead single, “Make It Better,” doubles as a mission statement for the band.

“We’re positive dudes,” Garner says. “We want to put forth a positive message. And we honestly believe that in the course, together we can make it better. That song is about people coming together. Even in the video, we made sure to show a lot of images of people coming together — people of all colors, all races, all genders, all religions.”

The very CSN&Y vibe of “Make It Better” is obvious from the opening notes, which is an immediate draw; with a crisp, stellar production and sound with a vintage sound, it is, indeed, a fine way to begin the E.P. and to present the band as described – the description is very apt.  The warmth of the Hammond organ mixed with the acoustic guitars and harmonies is completely on-the-one.  “Joshua Tree” has a charming New Orleans funeral dirge opening, kicking right into a very Band-like thumper; the vocals are passionate (borderline shades of Levon Helm come across clearly) and the full arrangement gives the song a cinematic feel and  “Honestly” has an early Eagles feel; a soft country motif that works just right.  I would implore you to listen to the last three songs and let yourself absorb them (especially “All I Want Is You”, which may be my favorite) and then listen to all six songs again.

These tracks are wonderfully familiar in the style and execution and I am more than fine with that; this is a very fine introduction to this band and I would love to hear what they do next.  In a time when no one “crafts” songs anymore, the members of High South understand exactly what songwriting and arrangement is about and how it’s done.  Impressive and welcomed here, for certain.  Please – do not pass High South by.

Change In The Wind is currently available