Billy Paul is – unfortunately – best known for his extraordinary R&B track, “Me & Mrs Jones” (personally, I can’t hear or talk about ’70s R&B without this song immediately popping into my head first). And while that’s not a bad song to be forever attached to, Billy Paul left behind a wealth of great R&B/Jazz classics, enough to classify him as great as Marvin Gaye, and many of the other classic artists of the time. One of the great albums that Billy Paul recorded is actually the home of “Me & Mrs Jones”, and is aptly titled 360 Degrees of Billy Paul, released in 1972 on the classic Philadelphia International label.

On 360 Degrees, Billy Paul provided us with the previously mentioned timeless track, he included stunning covers of Carole King’s “It’s Too Late”, completely remaking the song into its own R&B gem, Elton John/Bernie Taupin’s classic “Your Song”, and Al Green’s “Let’s Stay Together”. Eight tunes in all, with several from the Gamble/Huff team, 360 Degrees of Billy Paul is undeniably great from first track to the last. Stream and sample it if you don’t believe me or are now intrigued! 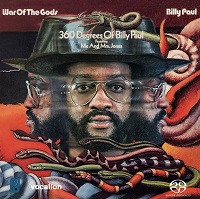 Billy Paul followed up 360 Degrees with several other albums, one of them another great set. War Of The Gods was released in 1973 and contained six songs that explored fusion in great fashion maintaining the strength of his magnificent and underappreciated Soul voice. With a blend of R&B, Jazz, Funk, Rock, and other musical flavors, War Of The Gods helped lay the bricks in the fusion highway. In fact, War Of The Gods stands alone as an unusual but important and powerful fusion album.

UK label, Dutton Vocalion will revisit both Billy Paul classics with a remastered for SACD ‘two-fer’ set that include Stereo and 4-channel Quad Multi-channel. The sets are newly remastered from original analog tapes by label head, Michael J Dutton. This SACD will feature a booklet with new liner notes.

This double title, among others, is currently available for order at Dutton Vocalion (here). In perusing the pages, I also noted that Deodato’s excellent Prelude set, along with Deodato 2, is also available on SACD Stereo and Multi-channel.

I’d be remiss if I didn’t say I’m anxiously awaiting these titles for this format!