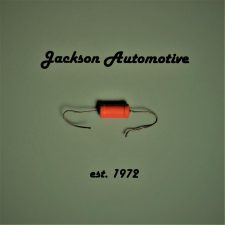 Jackson Automotive is the current project from New York-based musicians, Arthur Schupbach (AM Schupbach, Exploding Head, Electramone, Oilcan Art, Donald & Lydia) and Ed Stankewick (Melted Americans, Exploding Head, Baby Sage, Electramone). Their sound has been described as a blend of psychedelic, folk, garage, and Americana, but it is much, much more than that.  In a word, it’s a powerhouse.

Schupbach and Stankewick first played together in the mid 90’s in a band called Split following breakup of The Melted Americans (Ed’s band from 1983-91). Since then, the two have collaborated on and off for over 20 years.  Obviously, they have en massed a collection of dynamic songs that have range, melody and punch.

“I Was Only Asking” is an instant classic; quasi-’60’s, with a lot of space in the production; a delicious guitar mix and very McGuinn/Crosby/Clark/Hillman harmonies (and listen for the very effective organ undertow); “Basement” is a mix of garage/psychedelic, but with a tension that keeps it on a tight leash and makes it powerful; “Motel Queen” takes things in a different direction – a very ’70’s ROCK (empahsis on “rock”) with some tasty riffing punctuating the verses and “Doesn’t Feel Right” is a standout – rich with harmonies, droning guitars and keyboards giving it a fully realized scope of emotion – I may go out on a limb to say that this may be my favorite of this collection.  “She Knew” chimes along with an uptempo pace and hypnotic riff that does recall R.E.M. at their best (Chronic Town-era, etc.) or a sped-up Rain Parade; “Filter” is the most balls-out track; a mix of garage, controlled noise and power-pop – if I could, I’d remix this song, shoot a video (it’s a very cinematic piece, if you close your eyes) and push it to every outlet because it’s that good (and listen to the effects on the out-of-sight guitar solo) and “The Falls” is the acoustic-pop masterpiece – kind of the trump card that offsets the raucousness of the other tracks.  It’s low-key/understated and shows the widescreen ability of the band to do more than paint neo-psychedelic pop landscapes.

So now you’ve read what I have to say about Jackson Automotive; listen to the track(s) below and you’ll immediately understand what I’m trying to convey.  This is songwriting craftsmanship at its finest; a sense of melody and knowing, at times, less is more.  The more, as far as I’m concerned, is when will we get to hear more because this is so on-the-one and right.

*Not to be missed!