RE:Visit is MusicTAP’s ongoing series that offers a reassessment of albums from the past.

The final official Dire Straits studio album, On Every Street, is not as highly regarded as it ought to be. 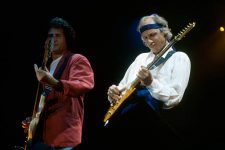 There are some clear, valid reasons why this might be the case. It did not have the shock of the new that the debut album (1978) had, which was a spiky rock record that had the feel of country but the attitude of new wave throughout – slightly detached, nowhere as cloying as the era’s soft rock often was. It did not have the grit under the nail of Making Movies (1980) or the almost-prog-rock ambitions of Love Over Gold (1982).

Far more difficult was that On Every Street followed the massive breakthrough album, Brothers In Arms (1985), a record that, despite Dire Straits’ eccentricities, racked up four significant hits: “So Far Away,” “Walk of Life,” the title cut “Brothers In Arms,” and the massive “Money For Nothing.” To frame how big “Money For Nothing” became, Sting’s throwaway cameo of “I want my MTV,” set to the tune of The Police’s “Don’t Stand So Close To Me,” prompted him to demand a co-write credit and royalties.

On Every Street had three singles and two are, in retrospect, ill advised choices. The kickoff song was “Calling Elvis,” a rambler that doesn’t gather much steam or go anywhere. On the contrary, it resolves into a long guitar jam that slowly fades out. Fine as an album cut, but as an opening salvo for the record expected to top Brothers In Arms, certainly not what you’d expect.

The other single, “Heavy Fuel,” is in nearly every way meant as a sequel to “Money For Nothing,” in tempo and in its caustic lyrical bent. This time, however, it’s not a working stiff ranting about the vapid rock star life, it’s the rock star himself. He’s a self-medicated, self-satisfied bonehead who is along for a serendipitous ride, but somehow is arrogant enough to presume he has agency over it all.

Lead singer/songwriter Mark Knopfler is showing his cards a bit on this one. Having done a few well-regarded soundtracks, worked with Bob Dylan on his Slow Train Coming album, gotten pride of place as the writer for Tina Turner’s “Private Dancer,” and achieved the biggest chart numbers of his career, one imagines he’s over the downwind methane of superstardom. The sarcasm of lines like “My chick loves a man who’s strong, the things she’ll do to turn me on, I love the babes – don’t get me wrong, hey – that’s why I wrote this song!” comes not from a place of envy, but perhaps from disillusionment.

“Heavy Fuel,” as an album track, makes far more sense than as a single, and especially so on this record which might be the most wry of the Straits’ efforts. It complements the soft wistfulness of “Ticket To Heaven,” which gently but soundly satirizes the beggar’s pitch offered by television evangelists, and the crossed-fingered faithful who keep supplying the funds for the Bentleys and Lear jets, all the while believing they’re paying dues toward an afterlife reward.

“My Parties” deftly sticks it to destructive consumerism and selfish solipsism as it lists off a bunch of things with which the party host is most pleased, all ridiculous absurdities, delivered with carefree “I know the world’s going to hell, but screw it, have another cocktail as it all burns” abandon. “Let’s hear it for the polar bears! Let’s hear it for the trees! Ain’t runnin’ out of nothin’ in my deep freeze! It’s casual entertainin’, we aim to please.” This cult of self would be further explored in Knopfler’s later solo work like “Imelda” from Golden Heart (1996), ripping shoe maven and dictator’s wife Imelda Marcos, and “Boom, Like That” from Shangri-La (2004), burning McDonalds “founder” Ray Kroc well before the Michael Keaton movie The Founder did.

This continuity of themes is not for nothing. If you scan the credits for On Every Street, you’ll see it may as well have been the first Knopfler solo in all but designation. But for himself, the only remaining original member on deck was John Illsley. Names that circled around his solo efforts – Guy Fletcher, who joined up with the Straits on Brothers In Arms; production assistant Chuck Ainlay; drummer Danny Cummings – are here. Structurally, there’s far more kinship between this album and Knopfler’s next, Golden Heart, than there was between it and the preceding Brothers In Arms.

Aside from the presumptive contractual obligation of “Heavy Fuel,” Knopfler seems to be having fun here. (This is not a sucker punch to “Heavy Fuel,” mind you. It’s a good song, but it has telltale reasons for its existence, and its songwriter has leaned hard on those reasons for his, and our, amusement.) The freewheeling “The Bug” carries the same water as “Walk of Life” philosophically, but is just a bit breezier. There is a casual good nature about songs like the folky “How Long” that is not present on earlier Dire Straits records where the LPs were filed in the rock section and had to prove it.

Music, like all the arts, is subjective. Why does someone who is twenty years younger than you like a song that sounds, to your ears, formulaic and repetitive? Why are those who are 20 years older than you so enamored of songs that espouse social messaging that they no longer adhere to? Why do you love that weird piece of frivolity that drives your significant others nuts when you force them to hear it? What makes a song important, beautiful, and meaningful to us often depends on us more than the song itself. That’s why well-meaning efforts like “Do They Know It’s Christmas” and “We Are the World” don’t age well. They force their gravitas upon you, rather than giving the raw materials that synthesize meaning within you.

So…it is not lost on me that, when I say that “On Every Street” is the best thing that came out under the Dire Straits umbrella, many will reject that claim. What about “Sultans of Swing,” “Telegraph Road,” “Romeo and Juliet,” or “Brothers In Arms”?

For me, “On Every Street” has everything Dire Straits was compositionally recognized for: both a sad tenderness and an “end credits” closing instrumental passage that encompasses the highs and lows. It is twice as dramatic in half the time, raises a fist and jerks a tear, and woulda/coulda/shoulda been embraced by rock radio. It is, in many respects, Derek and the Dominoes’ “Layla” in reverse order.

Even if that had been the case, had all the best minds and schemers strategized and optimized for maximum sales benefit, it might not have mattered. Note the date. This album fell on the dividing line between the implosion of hair metal and the explosion of Seattle alternative. The Southern accents of Dire Straits (by way of the U.K.) didn’t have a natural home here, and an onslaught of “pickle mouth” vocalists was about to arrive. (I’d love to take credit for the term “pickle mouth,” but it was coined by Rotten Tomatoes writer Jeff Giles, describing Creed’s Scott Stapp and his inclination to pronounce “free me” as “fee maoww.”)

Dire Straits would release their last record, the live document On The Night (1993), and Mark Knopfler would release Golden Heart in 1996 with an eye toward what we now call the Americana niche. Year by year, there’s fan rumbling about whether he should resurrect the band for one more record, which is a strange concept given, as said earlier, their last record was more a solo than not.

It’s also a particularly strong effort to go out on. There’s no shame in the piece, and lots of this generation’s twang rockers could learn something from it. A notable inheritor of the spirit, if not the direct sound, is Jason Isbell (check out “Cumberland Gap” from him and the 400 Unit). Tom Petty drew a solid parallel to latter Straits. In fact, longtime Heartbreaker associates Jimmy Iovine and Shelley Yakus produced Making Movies.

Many bands go out with embarrassments closing the lid on a career coffin. Dire Straits’ On Every Street, regardless of its shortcomings, does not suffer such an end.