This is Roger McGuinn’s first studio/rock album released since 2004 and the release date is probably tied to the “Sweetheart of the Rodeo Tour” that was kicked off in July at the Theatre at the Ace Hotel in LA. That album was the band’s worst commercial effort, but the ensuing 50 years have most people viewing it as one of the more influential albums that exposed rock audiences to Country and Western music. (BTW, I was fortunate enough to be able to see the first concert here in LA. Suffice it to say, it was the best Byrds-related concerts I have ever seen, but that’s a whole ‘nother story.)

After the dissolution of the Byrds in 1972, McGuinn embarked on a solo career with mixed results. His debut solo album, Roger McGuinn (1973), and his fourth, Cardiff Rose (1976) received positive critical reviews, but he was not able to reach a wide audience. Following a brief reunion with fellow Byrds, Gene Clark and Chris Hillman (for three albums), Roger largely retired from recording and embraced touring around the country with his wife, Camilla, and preserving his love of traditional folk music with monthly releases of old folk treasure on his web site, The Folk Den. 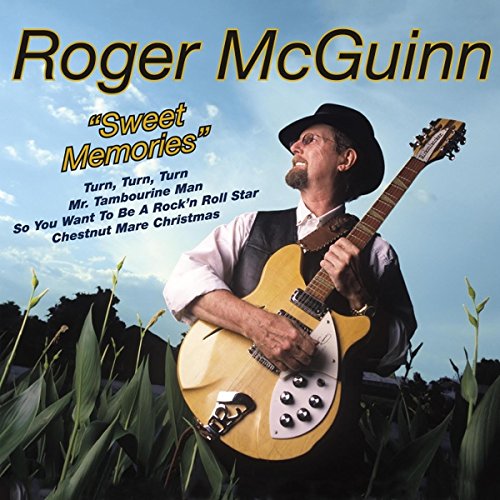 Sweet Memories is a collection of never-recorded songs that McGuinn wrote and played on tour in the eighties. Most of his fans have heard these song played in concerts. Roger McGuinn recorded them and played all of the instruments for this album (Marty Stuart contributes on one song). This album is a trip down memory lane to be sure, and it sure is nice to have an official version of these tracks.

Let me mention that Roger could have spared us by not including rehashes of “Mr. Tambourine Man”, “Turn Turn Turn”, and “So You Wanna be a Rock and Roll Star”, although I will cop to a ‘guilty pleasure’ plea in hearing these tracks with the 12-string sound compressed by his Rickenbacker. For this album, there are two notable omissions, “Life in a Northern Town”, and “America for Me” , both which will always remain with me long after hearing them live.

The recorded versions of his “lost songs” are revelations. The track “Sweet Memories” is evocative of McGuinn’s atonal composition “Russian Hill” from his 1977 album, Thunderbyrd. “The Tears” (written by his wife) is a pretty ballad with some nice flamenco guitar. “Grapes of Wrath” was inspired by the 1940 John Ford film and would not have been out of place on McGuinn’s debut solo album. “Light up the Darkness” is an early manifestation of his conversion to Christianity and provides a glimmer of the serenity that was to imbue his work in the future. “5:18” is a beautiful piece about watching a storm move into the California coast. “Friday” is a fun piece reminiscent of “Beach Party” that he recorded with Bobby Darin and the City Surfers before he joined the Byrds. “Chestnut Mare Christmas” revisits the Byrds Classic from the Untitled album. It might offend some Byrds purists, but it’s a fun update that reflects current sensibilities.

I was initially disappointed in this album after my first listen, taking an attitude of “…nothing happening here folks…move along”. But once I re-positioned my thinking and context, my mood changed considerably. “Sweet Memories” puts the career of an R&R legend into more proper context. Here’s a man who, after years of dealing with the train wreck of stardom, has found a degree of inner peace in his later years (he’s 75). He’s comfortable with his career choices and had found some degree of contentment in an industry that has chewed up countless lives. More power to him for that.