Progressive music took many, many turns as the ’60s turned into the ’70s. One such band that helped shape genre shifts was Uriah Heep. Formed in 1969. By 1970, this turnstile band (boasting of several classic-era line-ups over time, had released its debut, Very ‘Eavy Very ‘Umble. By 1973, Uriah Heep had released Sweet Freedom as a new signing to Warner Brothers, with the release of their successful single, “Stealin'”.

Between their debut and Sweet Freedom, the band released four other classics (Salisbury – 1971, Look At Yourself – 1971, Demons & Wizards – 1972, The Magician’s Birthday – 1972). With Demons & Wizards, the band had enormous US success with the extraction of “Easy Livin'” as a single. The songwriter for both of these mentioned Uriah Heep hits was Ken Hensley.

Ken Hensley left the confines of Uriah Heep in 1980 after the release of Conquest (1980). With only Mick Box left from the classic lineups, and the changing musical climate, Hensley felt the ongoing directional changes were not in standing with his vision. But before he left, Ken Hensley had dabbled with two solo releases (the incredible Proud Words On a Dusty Shelf (1973), and Eager To Please (1975)). After his departure, he released Free Spirit (1981). From there, Hensley, in addition to his many band collaborations, released ten solo titles. 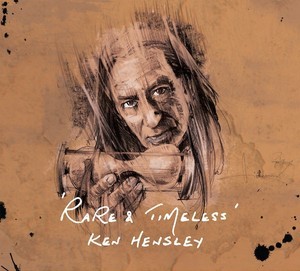 On March 30, in conjunction with PledgeMusic and BMG UK, Ken Hensley will release a personally curated compilation of fifteen songs, some previously unreleased, and three new tracks (two brand new compositions, and one a re-record of “Lady In Black”, a Uriah Heep song from Salisbury). This new anthology will be called Rare & Timeless.