For so many years, the legend of John Lee Hooker has flown a large, high flag for the Blues. As listeners and fans of the genre, we have been blessed with a closely aligned circle of Bluesmen that have provided many albums of classics. John Lee Hooker is one of the leaders of that coterie of Bluesmen. His career has given well over fifty albums under the umbrella of more than a few labels over his lifetime. One of those albums is the classic 1961 release of Burnin’. Burnin’ was issued via Vee-Jay Records during his Chicago Years, and gave us the single, “Boom Boom”. That classic is now celebrating 60 years of existence.

On February 24 of 2023, Craft Records will reissue Burnin’ in a celebratory 60th Anniversary set that will deliver a newly remastered album from original analog tapes, but will also expand the set with a previously unreleased alternate take of “Thelma”, but will also provide both Stereo and newly mixed Mono versions of the entire album. An 8-page poster booklet is packed in. 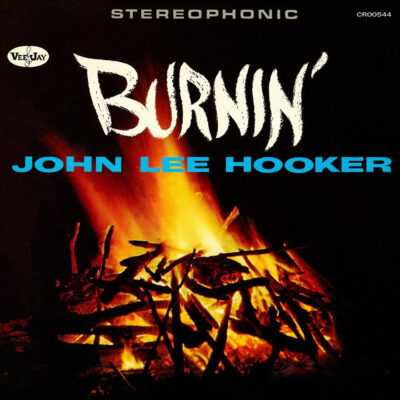 The 60th Anniversary Burnin’ reissue will be released on CD, DD, and 2 editions of 180g-weight vinyl LP, which includes an exclusive limited edition color set (Fuego=orange/red/black splatter) with 500 copies available, and a more widely available industry standard black. The LPs will only include the Stereo version and NO bonus track. Pre-order here. Bundles are available as well. There will be store-exclusive color LP editions that include Flame Orange (Barnes & Noble), and Translucent Red (Record Day Studio).