The phenomena that is Robert Fripp has delighted and enraptured fans worldwide through his King Crimson band, and his solo works. There’s nothing I could say here that couldn’t be said better by someone else. Needless to say, he is one of our great Rock performers.

On May 27, DGM will release a complete and exhaustive review of his solo efforts ranging from the short but busy years of 1977 through 1983. The box will be called Exposures (Exposure from 1978 was his first solo album.) The Exposures Box will contain a whopping 25CDs, 3DVD-Audio, and 4BD-Audio. 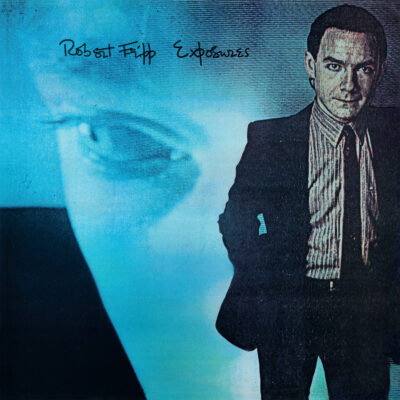 You can expect a mountain of music in Exposures‘ 25 CDs that will include unreleased music, Frippertronics, studio and live albums, new mixes, Steven Wilson mixes of Exposure, new remasters, physical editions of previously available DDs, and much more (see the ‘cut n pasted’ track lists…no, I wasn’t going to sort through that! Apologies, but I did try to clean it up.)

The three DVD-Audio will provide hi-res Stereo, Quad, and 5.1 Surround mixes of Exposure and other albums. The four BD-Audio discs will provide the same offerings in more enhancements (DTS, Atmos, and others) and will include a wider range of extras.

The Box will also include a 48-page booklet with photos, memorabilia, and notes. The box will be 12″ by 12″. Order point here.

CD5 (Last of the Great New York Heartthrobs, Plus: Exposure alt takes/rough mixes)
Contains the original album running order/featured vocalists/original lyrics in some instances (with the original proposed album title) as mastered in August 1978, taken from the master tape and accompanied by a selection of alternate takes and rough mixes from the album sessions.
Previously unreleased, except select tracks from additional material section previously available as downloads from dgmlive.com. New to disc.

CD6 (Exposure First Edition, Plus)
The 2006 master/running order of the First Edition of Exposure plus loops recorded for Here Comes the Flood.

CD7 (Exposure Third Edition, Plus)
The 2006 master/running order of the Third Edition of Exposure plus the additional material from that release – album songs with Daryl Hall/ Terre Roche vocals, plus material from Peter Gabriel II, Daryl Hall’s Sacred Songs and a previously unreleased mix of Here Comes the Flood from Exposure.
Previously released except Here Comes the Flood mix.

CD9 (Breathless or How I Gradually Internalised The Social Reality Of Manhattan Until It Seemed To Be A Very Reasonable Way Of Life, Plus)
Using another abandoned title for the album (as does disc 5) and following, approximately, that album running order using Steven Wilson 2021 mixes and, mostly, Daryl Hall vocal performances. Also includes a sequence of previously unheard loops. Contains new mixes/previously unreleased stuff.

CD14 (God Save the Queen/Under Heavy Manners 2021 remaster, Plus)
GSTQ/UHM newly mastered from the original master tapes by David Singleton. Material released on disc for the first time in many years, plus a previously unreleased track from the same sessions, a single edit of UHM and God Save the King from the 1985 Fripp/LOG CD compilation.
Material previously released in different masters/formats.

CD17 (The League of Gentlemen – Paradise Club, Boston, 26/6/80 [2nd show], plus)
Recorded just one week into the band’s sole US tour. Also included are two rehearsal performances including the LOG take on Disengage. Previously available as a download from dgmlive.com. New to disc.

CD20 (Let The Power Fall, 2021, Plus)
Newly mastered from the original master tapes by David Singleton and on disc for the first time in many years plus a single edit and two earlier mixes of another track titled 1984 at the time of mixing. Material previously released in different masters/formats and/or previously unreleased.

CD21 (Washington Square Church, August 1981, 2021 mixes)
Recordings drawn from a series of concerts at the New York City venue (the full series appears on Blu-Ray, Disc 27). Newly mixed and mastered from the original tapes by David Singleton to produce the finest example of Frippertronics in performance. New mixes/Previously unreleased.

CD22 (Resplendent in Divergence)
A collection of Frippertronics that appeared as individual tracks on compilations, other albums and the DGM website assembled and mastered by Alex R. Mundy at DGM. Previously released, some material new to disc.

CD24 (More Blasts, More Blasms – Sessions, Jams and Rehearsals)
Two discs of recordings and elements of recordings from various points during the Exposure sessions giving an insight into the process that led to the album. Assembled and mastered by Alex R. Mundy at DGM. Some material previously available as downloads at dgmlive.com, most new to disc.

CD25 (The League of Gentlemen – Royal Exeter, Bournemouth, 21/9/80, John Peel broadcast, 17/11/80)
The League of Gentlemen’s autumn tour of the UK included some of the short-lived band’s most energised performances. This newly mastered audience recording is one of the few recorded examples of that tour. Also included are recordings from LOG rehearsal tapes made by the band & first broadcast on the John Peel Show on the BBC in November 1980. Some material previously available as a download from dgmlive.com. New to disc.