I’m compelled to write up a short re-introduction to an old classic song originally released by Petula Clark. That song is “Downtown“. For the record, the 1964 song won a Grammy, sold over a million copies, and hit number one on worldwide charts. Flash forward, the timeless track makes a newly sung debut in the upcoming Edgar Wright movie, Last Night In Soho. This time, it’s sung by actress Anya Taylor-Joy, who has starred in movies like The Witch (2015), Split (2016), Glass (2019), Emma (2020), most notably in the Netflix limited series of The Queen’s Gambit (2020) and who also stars in Last Night In Soho. 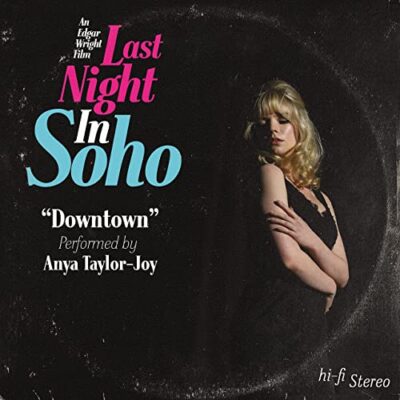 For the trailer of Last Night In Soho, a downtempo version of “Downtown” is used. It’s a spectacular display of vocal talent using a sultry style applied to the song. But, since interest has been exploding, the song was issued as a track and has acquired almost 100,000 streams in Spotify alone. An uptempo version replicating the sprightly Petula Clark version is also in release and has done 71,000 streams in Spotify. (I haven’t seen the movie as of this writing…yet)

The two versions of “Downtown” by Anya Taylor-Joy are accompanied by an A Capella version that’s also fun to hear.  Currently, the song is only available via streaming services and the soon to be released soundtrack. But we’re hoping for a vinyl 7″ single to purchase soon. The cover is a cool stylized ’60s rendition. My curiosity is what you might think about the two versions (below).